Spanish-Speaking YouTubers Who Are Excellent for Intermediate Spanish Practice (not lessons, intended for native speakers, great for improving listening comprehension)

by Andrew | Mar 14, 2018 | Learn Spanish on YouTube: Lessons Based on Spanish YouTube Videos, Recommended Channels, How to Do It, Telenovela Method | 0 comments 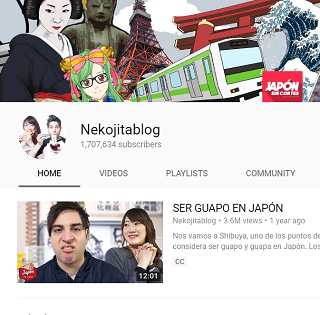 This is what a lot of people are looking for but they either don’t know it or don’t know how to describe it: Spanish-language videos that are interesting/entertaining, intended for native speakers (that is, these videos are not over-simplified for Spanish-students), but which are not extremely difficult, and so would serve as excellent intermediate Spanish practice for students who have surpassed the beginner’s stage but are not yet advanced (“advanced” here means they can understand nearly everything in Spanish that they hear).  For those familiar with it, I’m talking about students in the high-A1 to B2 range per the CEFR scale.

What you want are Spanish-speaking YouTubers who make interesting/entertaining videos in which they speak clearly, not too fast, but are still using their normal, everyday, native-level Spanish.

I know this was something that I wanted at that stage and which helped improve my Spanish immensely, it’s excellent intermediate Spanish practice.  Beginners and low-intermediate students would also benefit from my list of sites with Spanish videos and Spanish subtitles.  This is media that you might have really struggled with as a beginner, having to look up nearly every word, having to replay a sentence dozens of times before you could understand each word and the overall meaning from beginning to end, etc.  Well, you’re not at that level anymore.

Now, with this sort of stuff, you’re missing one word out of every seven, fifteen, or twenty (depending on your general level in Spanish, the difficulty of the language the speaker is using, and how quickly they’re speaking as well as how similar their accent/dialect is to the one you’re most acclimatized to).  On a related note regarding word frequency and priority, I recommend you check out my article on how many words you need to know to be fluent in Spanish (and which ones you should focus on and when).  You can probably get the general gist of what they’re saying without subtitles, without having to replay it a dozen times, you can just sit and listen and generally get what they mean…but you don’t get all of it, and you know it.  You know you need to improve.  This is what you need.

Let’s get started with some Spanish-speaking YouTubers I can recommend.  I’ll include a link to their channel, a short description, and a single video to serve as a sample for you so you can see if they might be what you’re looking for or not.

Here’s the list for you (these are all channels I watch and am personally familiar with and, as such, can recommend):

Fantastic vlog by a married couple living in Japan about the culture there and their interaction with it. The man is Spanish and his wife is Japanese. They speak Spanish during the videos. One of my favorites.

Vlog by a Mexican girl living in Germany, mostly about German and/or Mexican culture. Really well done and she speaks slowly and clearly (well, slowly compared to Spaniards).

Vlog by a Spanish chick. I believe she claims to be the longest continually running Spanish vlog or something like that (10 years as I recall)? Pretty interesting, she may seem annoying at first, but give her a chance (I like the intro, I think it’s cute, but that’s me).

Very popular channel that does skits. They’re all Spanish and based in Spain (I forget which city).

Ditto (same as above, some people from one sometimes even make appearances on the other’s channel).

Basically it’s a travel channel. He’s Spanish and loves amusement parks. He loves them so much he recently moved to Orlando, Florida. He speaks surprisingly slowly for a Spaniard, it’s one of the reasons I like his channel.

Forget the name, she does almost nothing with beauty/makeup on this channel, it’s all vlogs about her and her family living in Japan. She’s Mexican, husband is Japanese. Slower and not edited as well as Japon con Jamón, but still interesting.

Literary/linguistics channel. He talks about books and languages. Be warned: he’s Spanish and sounds like it, meaning he talks fast.

One final resource I want to suggest isn’t a YouTube channel but a site that uses a lot of videos from YouTube and other places and which I think may interest you if you’re at the advanced-beginner-to-intermediate level that this blog post is targeted at: Yabla.  This is a fantastic site but of everything I’m recommending here it is the one thing that’s not free, you do have to pay (~$10/month).  What they do is take or make videos by native speakers that are different levels and then insert them into their own purpose-made interface for you to use to learn Spanish from said videos.  You’re supplied with subtitles in both English and Spanish that you can turn on and off (you can turn on/off either or both), when you click on any word in the Spanish subtitles you’re provided with a definition via the dictionary on the right side of the window (video is in the center) plus that automatically adds the word to your flashcards for later review.  There are quizzes and games and all sorts of other things as well.  Check out my review of Yabla here that includes many screenshots of the interface so you can see what you’re getting, descriptions of all the video genres they have available, how they organize the videos by dialect and difficulty, pricing information for teachers/organizations, as well as a lot of other information.

And that’s all I’ve got for now.  I’m just putting this post up quickly because something’s better than nothing and I’ve had a lot of people asking me for recommendations for intermediate Spanish practice.  I absolutely will add more Spanish-speaking YouTubers later.  Also, be sure to check out my list of Spanish YouTube Lessons (mostly for beginners), that is to say YouTube channels that teach Spanish.

Also!  Keep in mind that using popular media like this to learn Spanish, though an excellent technique (it’s how I initially did it) can be done much more effectively, efficiently, and with far fewer problems and frustrations if you have a solid guide to help you do it (how to imitate the speakers so you’re actually talking like them, how to quickly note down vocabulary and learn it so you don’t forget it, which resources to use and where to find them, etc.), and it just so happens I’ve written a book that does precisely that…

If you thought the above was at all useful and you want to learn (or are learning) Spanish, please give me a chance and read what I have to say about my book below!  Stick around after (or skip past it) because I’ve got a list of related resources and further reading (on this site and others) for you that may be of interest.

For more Spanish-learning resources on YouTube, I have a whole section on my site for you called Learn Spanish from YouTube: Recommended Channels, How to Do It, Lessons Based on YouTube Videos.

I also have two lists of sites with videos in Spanish that may help you:

I also wrote a whole post about why I recommend the Spanish, state-owned RTVE so much and what some of my preferred programs are on there.

On this “subreddit” (as the individual sections about select topics are called) you will find lots of resources and many people to interact with and talk to about learning Spanish (currently has ~52,400 subscribers).

Lastly, Lindsay Does Languages maintains a similar list of her top 10 such channels here.

Thank you so much for checking out my blog and I hope you’ve enjoyed my writing.