by Andrew | Jun 4, 2020 | Articles/Posts (go here to start learning Spanish!), Learn Spanish on YouTube: Lessons Based on Spanish YouTube Videos, Recommended Channels, How to Do It | 0 comments 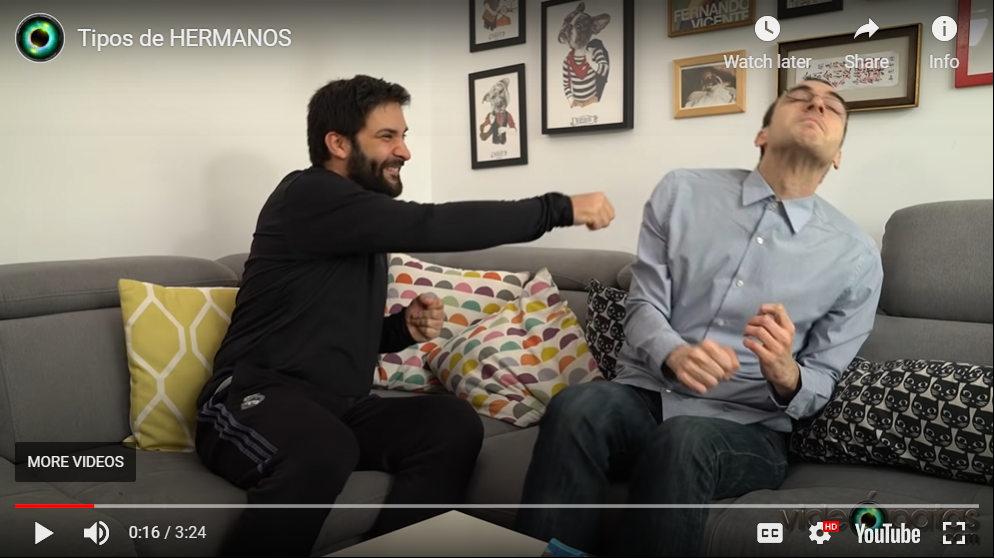 This is by one of several YouTube channels I’m subscribed to which is in Spanish and intended for Spanish speakers (it’s not intended for non-native students so they speak at a normal rate and don’t explain the language they’re using).  It’s a comedy sketch channel called Videópatas and I think most of their videos are fairly entertaining.

A side note: YouTube’s automatic subtitles have gotten much more accurate over the years and, as long as the audio quality is good and there’s not too much ambient noise or multiple people speaking at once, they’re more than sufficient, so definitely hit the “CC” button in the bottom right hand corner of the video player to turn them on (you should get Spanish subs, if not then click on the gear icon next to the CC button to change the language settings).

“Tipos de hermanos” means, “types of siblings”.  This particular video is of a genre that they do quite often, which is, “Types of ________”, where they portray certain behaviors or personality types in a comedic or entertaining way.  This one is about siblings and some of the different ways in which they behave that are funny and most of us are familiar with.

Now, obviously there is no way I can cover all of the Spanish used in it.  It’s only 3m24s long, yes, but there is still a ton of dialogue.  What I’m going to do is explain the labels they use for the different types of siblings that you see pop up in a funny text box at the beginning of each portrayl.  You can turn on the subtitles, like I said, and then look up whatever else you have trouble with.  You don’t need to be able to understand a lot of the Spanish they use in order to be able to understand the video because you’ll be able to glean the basic gist of it from the context that you can see.  Even someone who speaks no Spanish at all could basically understand what’s happening here.  Let’s have a look at it:

Spanish tends to make nouns and adjectives out of verbs, English does the opposite: we make verbs out of nouns (e.g. “game”, the noun, came first, then the verb “to game” and “gamer”, someone who plays video games, came much later).  The only time you see Spanish doing the opposite (turning a noun into a verb like English) is with anglicisms (words imported from English into other languages), e.g. the way you say “to tweet” in Spanish is “twitear”, which came from the English verb, “to tweet”, which came from the English noun, “a tweet” (something posted on Twitter).

Gorrona is an adjective that originates from the verb, gorronear.  Gorronear is defined by the RAE as:

So it means, “to mooch, freeload, or scrounge”.  Here are some more examples from Reverso Context if you’d like to see them.

So the adjective, gorrón/gorrona, just means someone who does this thing: a mooch, a freeloader.  As you likely already know, hermana just means “sister”.  So what do you think “La Hermana Gorrona” is going to be about?

The sister who mooches off you, of course.  She borrows without asking, she steals food, she begs for money constantly (which she doesn’t repay), etc.

Bonus for this scene: “Estaba entre la ropa tendida” means “It was amongst the hung clothes” (tender can mean to lay or hang something and the past participle is tendido/tendida, so “ropa tendida” is literally “laid/hung clothes”, I would presume here this means the clothes on the clothes line).  Searching Google Images for “ropa tendida” tells us all we need to know 😉

I doubt this needs much explanation, but the verb for “to adopt” in Spanish is adoptar, and of course the past participle (the “-ed” form of the verb, e.g. “adopted”) is adoptado/adoptada (adoptado if the person is male, adoptada if the person is female).  So what do you think el hermano adoptado means?

“The adopted brother”, of course.

So you already know that hermana means “sister”, now what could gemela mean…?

Also, you see “Te he ganado” – this is how you say “to beat someone [at something]” in Spanish.  Yes, ganar literally means “to win”, but the way they say that a person or team has “beaten” another one in some type of competition is to literally say that they have “won” them.  A couple more examples from Reverso Context:

And in the second round on March 9, “We beat them by a hair.”

Oh, and with regards to, “¡Tomaaaaa!”: that’s the imperative (aka “command form”) of the verb tomar, which means “to take”.  In this context it means, “Take that!”.

Applying what you’ve just learned greatly helps you retain it in your long-term memory, I strongly recommend you take the, maybe minute or so it’ll require, quiz below that tests you on the above Spanish you’ve just learned.  It’s only ten questions, most of which are multiple choice with a couple fill-in-the-blank questions.

Now have a look at the video again and see how much more of it you can understand.  Don’t forget to turn on Spanish subtitles if you want.

Are you learning Spanish?  Would you like to use popular media like the above video, as well as movies, shows, music, etc. to do it?

I literally wrote the book about how to do that: it’s about how to learn Spanish from popular media like YouTube videos, Netflix series, movies, music, books, etc. You get to pick things that interest and/or entertain you, that are made by and for native speakers, and I’ll teach you how to learn Spanish from them.  If that interests you and especially if you’d like to support my work, I’d really appreciate if you could check it out, it’s called The Telenovela Method.  It’s currently available in both e-book and paperback from:

Hope that helps, please consider subscribing to my emails (sidebar on the top right) or at least push notifications for when I put up new blog posts.  My social media accounts are on the slidey thing on the left (I’m active on YouTube, Instagram, Tiktok, Pintrest, Facebook, and Twitter).