Learn Spanish from the News #2: The National Gallery in London Reopens 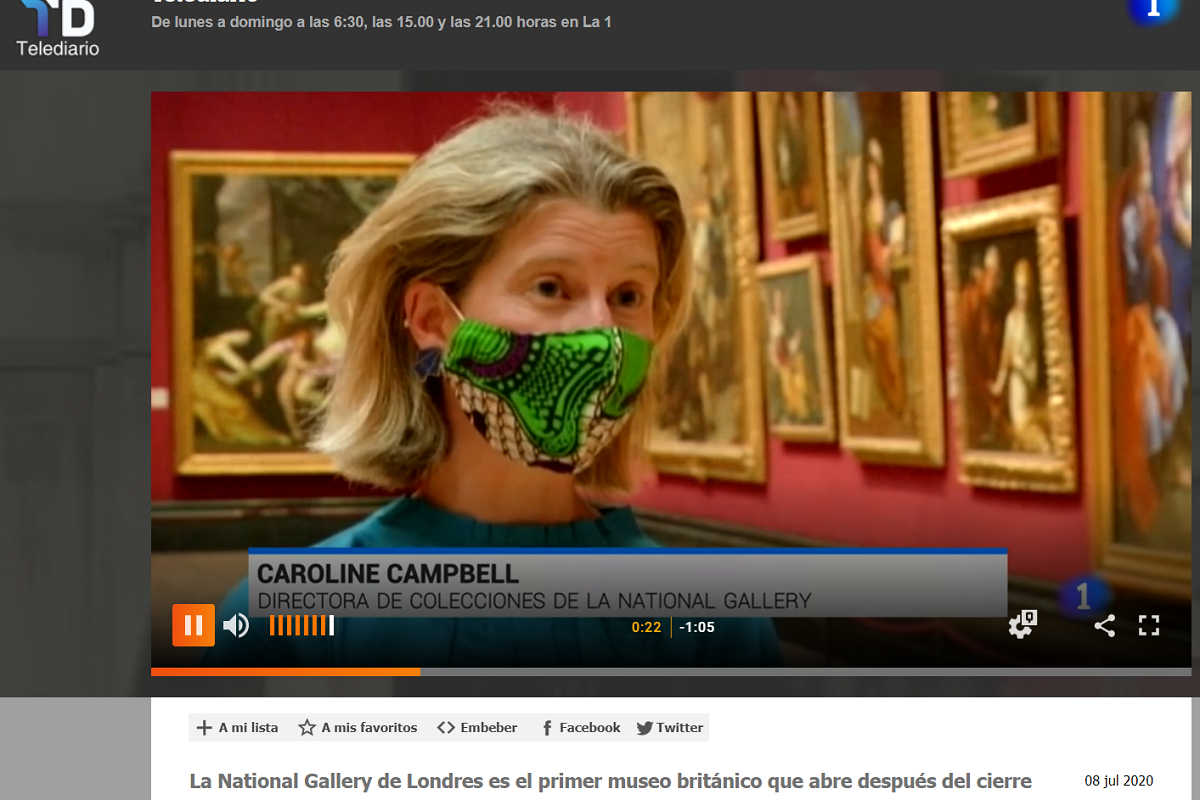 In this series, “Learn Spanish from the News”, I’ll take short news clips and use them to teach you some of the Spanish used in them.  Today we’ve got a clip just a bit over a minute long from RTVE in Spain talking about the reopening of The National Gallery in London.  I’ll post the video directly below so you can view it and do your best to understand it, then I’ll cover a few words and expressions used in the report, there will be a short quiz you can opt to take, and finally I’ll post the video again so you can see how much more you understand.  Let’s get started by having a look at the clip (here’s a direct link to it if you prefer that), just do your best:

As many of you already know, “abrir” means “to open”, so what do you think “reabrir” means?

Right, “to reopen”.  So what is said here is, “The National Gallery of London reopens its doors after more than one hundred days closed…”

“Cerrada” comes from the verb, “cerrar”, which means “to close”.

A “cita” is a date or appointment, and “previo/previa” means “previous”, so they’re saying you have to have made a reservation in order to get in along with other requirements.

If you’ve never heard that word before, don’t feel bad: this was the first time I’d ever heard it.  “Pinacoteca” means “art gallery”, so what they’re saying is, “plastic screens for the staff (“personal” in this context means employees or staff) of one of the largest art galleries in the world”.

Tip: Search Google Images for words that you don’t know, especially if they’re physical objects or concepts well-represented by images, this helps you remember what the word means, gives you a better idea of the exact meaning than what a written definition can give you, and if you’re making electronic flashcards in Anki, Memrise, Quizlet, etc. then this gives you an image you can use (e.g. put the image on the front of the card and the word on the back so when you see the card you only see the image and then have to think of the word, “pinacoteca” in this case).  Here’s what came up for me when I searched for “pinacoteca”: 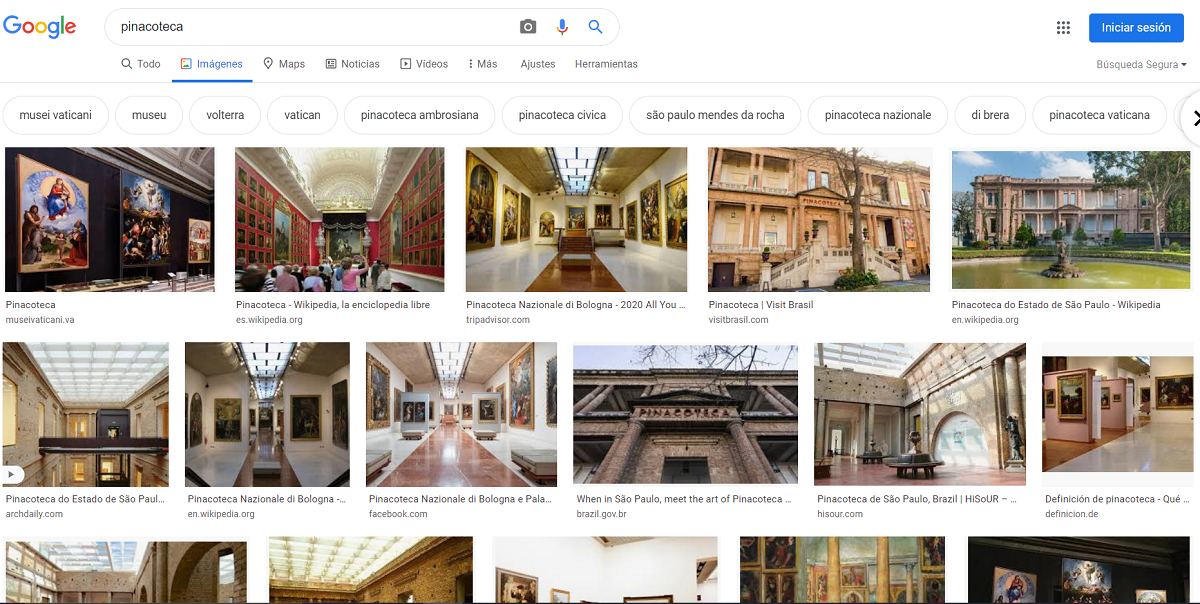 So what we get here is this: “…this museum had never been closed for so long, even during the second world war it kept its door open, although without paintings on the walls”.

“Llegada” just means “arrival”, as you’ve likely guessed, since “llegar” is the verb which means “to arrive”.  “Se calculaba” is what I wanted to focus on here: you can probably guess that “calcular” means “to calculate”.  Now, the way that you do the passive voice in Spanish is by making a verb reflexive, usually when it wouldn’t be.  Here, “calcular” just means to calculate and it wouldn’t normally be reflexive, so the way we say that “it is calculated” (the passive voice leaves out the subject, so we don’t know who caclulated it and it’s implied it doesn’t matter) is by saying, “se calcula”.  Now, you’ll note that it’s “se calculaba”, not “se calcula”.  This is because they’ve also put the verb, “calcular”, in the Spanish imperfect tense, which is a past tense but one that implies that the action, though started in the past, is still ongoing, so I would assume that although the caclulating (of the number of visitors) began in the past, they’re still doing it.

Before the arrival of the corona virus, a normal day it was calculated that around fifteen thousand people could visit the National Gallery…

Also note that “podían” is in the imperfect tense (the verb is “poder“, which means “can, to be able to”), implying that not only could people visit the gallery in the past but that they could now as well (using the preterite form of poder, “pudo”, would imply people can no longer visit the gallery).

This is a very common phrase you need to get to know in Spanish: “con antelación” and the corresponding, “con (amount of time) de antelación”.  “Antelación” means something like “advanced notice” or “anticipation”, and it’s almost always only ever seen accompanied by “con”, so it’s a lot like the word “notice” in English: usually accompanied by “with” and implies a certain amount of advance notification prior to an event.

So what they’re saying here is, “…who have requested an appointment through the web, several days ahead of time [literally, ‘with several days of notice’].”.

“A pesar de” is also an extremely common phrase in Spanish you need to know if you don’t already.  It means, “in spite of” or “despite” and can take two forms: “a pesar de” and “pese a”.  They both mean exactly the same thing: “in spite of”.

“Pesar” literally means “to weigh”, and despite some cursory searching I’ve still no idea how it came to mean this when combined with “a”, so if anyone knows and wants to leave a comment, they’re more than welcome.  The full translation of the above phrase is:

Everyone claims to be happy, in spite of the limitations…

Lastly, note how “sentirse” is reflexive: yes, “sentir” just means “to feel”, but it means to feel something external.  When you feel in Spanish, it’s an action you’re taking upon something or someone else: you feel the texture of an orange, you feel the heat in the air, when you apologize you do so by saying, “lo siento”, literally “I feel it”, meaning that you feel the hurt you have caused the other person.  So if you want to describe an internal feeling that you have, guess how you do it?

Yup, you say that you “feel yourself”.  So if you want to say you feel good, you say, “Me siento bien”, literally “I feel well myself”.  “I feel bad” would be, “Me siento mal”, literally, “I feel bad myself”.  If you, like the presenter in this news clip, want to say that everyone feels happy, you would describe how it is that they feel internally, that is the sensation that they are feeling within themselves: “todos dicen sentirse felices” (literally, “everyone says they feel themselves happy”).

Quiz!  Apply what you just learned, it’ll help you immensely when it comes to remembering it (which will help when you watch the video again which is immediately below the quiz)!

Are you learning Spanish?

Alright, that’s all.  Please don’t hesitate to leave a comment letting me know what you liked, didn’t like, what I could do better, what you had trouble with, questions, etc.