Spanish Study Abroad (learning Spanish in Spain, Mexico, etc.)? You probably don’t want to do that… 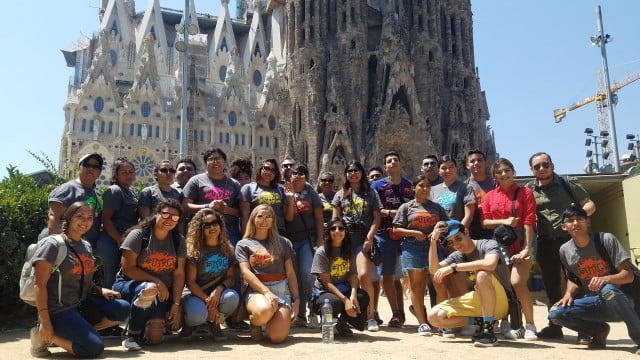 I get the appeal: sounds like fun, makes sense on the surface, get a little cultured, get a little drunk, catch of a bit of clap, come back home fluent in Spanish.  However, it usually doesn’t work like that (fun-drinking-STDs yes, fluent in Spanish, no).  I say this as someone who speaks Spanish quite fluently, started learning it on their own about twelve years ago, and has since spent three months in Spain and eight months in Latin America (three in Colombia and five in Chile).

I advise you to first learn a language from home, wherever you live (doesn’t matter where: you need an internet connection, that’s all you need), and then travel to the country where it’s spoken as a reward/vacation and/or in order to practice and refine it.  I shall now explain why.

If you speak English…

…which you do if you’re reading this, either as a native speaker or a non-native who speaks English at a fairly high level, then you’re going to have a very hard time not resorting to English to communicate.  This is especially true if you’re in some sort of school or program: most of your fellow students will also speak English, you will hang out together outside of class and therefore you will speak English most of the time that you’re not in class, and if you are going to do that why didn’t you just stay home and take a Spanish class?  It would have resulted in pretty much the same thing (Spanish in-class, English outside of class).

English is by far the most widely spoken second language throughout the world, especially in Spanish-speaking countries.  You’ll never have trouble finding someone who speaks English to help you with whatever you need and consequently it will be very difficult to avoid that temptation (or necessity, sometimes) unless you already speak fairly good Spanish.

I spent almost three months in Spain in 2015 and barely made any progress the first month because I wasn’t intentionally doing anything to make progress, and those things I did which really helped (online study, tutoring sessions, and language exchanges) were things I could’ve done at home.  This was my big takeaway from that trip: not only can you learn a language at home just as well as you can in the country where it’s spoken, it’s often easier because you’re not dealing with all issues and problems posed by traveling abroad (getting clothes washed, coordinating flights/trains/rental cars, where to get groceries, how to get tickets for this/that, how to get internet, lost/stolen passport, oh no my toilet’s broken how do I get it fixed…etc.).

I’ll tell you something else I learned from that trip: you really, really want to learn the language to a fairly decent level first (around B2 preferrably, per the CEFR scale) before you travel to the country where it’s spoken, that way you can treat it like a vacation and a reward to yourself and enjoy yourself while you’re there rather than spending all your time working on trying to learn the language.  My Spanish was probably high-B1, maybe low-B2 when I landed in Spain, and that definitely made things much easier for me, but I was still struggling the whole time to understand people and that really made my experience there less enjoyable and more stressful.  I’m to the point now where I kind of don’t want to bother travelling to a foreign country for any substantial amount of time (more than a couple of weeks) unless I’m already around C1 in the language spoken there – sounds excessive, I know, but that’s my opinion at this point.

Benny Lewis spent six months in Spain in 2003 and barely learned any Spanish at all…and he was trying to learn Spanish the whole time.  It wasn’t until he refused to speak English and insisted on intentionally studying and using Spanish every day that he started making significant progress.  He mentions meeting a lot of expats who had been there years, sometimes decades, who barely spoke the local language.  The folks over at Happy Hour Spanish and Olly Richards at I Will Teach You a Language recount similar experiences and observations.

Doing a study abroad program requires a substantial investment of both time and money, in the planning as well as the actual execution while you’re there.  This is in addition to the fact that, nowadays with the internet and what we know about language-learning, it’s not only not necessary but doesn’t even offer much of an advantage over just learning the language at home.

The overwhelming majority of the things you can do to learn a language that really work well can be done from home just as well as they can from the country where your target language is spoken, sometimes better if wherever you would’ve ended up has poor internet connectivity.  Here, look:

I’m sure there’s more but that’s most of it I believe.  Regarding the last one: yes, you definitely do want to travel to the country where your target language is spoken, it does have its advantages, but that’s all: some advantages.  It’s not at all necessary anymore.  Do it, but treat it like a vacation or reward, a time when you’ll refine your target language, not when you learn it from scratch as a complete beginner.

Ok, you’re going to travel to Spain/France/Mongola/wherever and learn that country’s language by interacting with the locals, going out to bars and restaurants and talking to people left and right, constantly interacting in their language thereby learning it.  Do you usually act that way at home?  Are you good at approaching strangers cold like that?  Can you make friends quickly?  Does the culture of your target country even lend itself to this (you may have trouble in German-speaking countries, for example)?

If you’re a socially awkward shut-in, this really isn’t going to work for you, this method of learning a language from scratch by traveling to where it’s spoken.  The only reason I was able to substantially improve my Spanish in Spain was because after the first month I started doing language exchanges with locals nearly every day, and the only reason I was able to do that was because one of my Spanish tutors was kind enough to point out a local website where I could post classified ads advertising that I was a native English speaker looking for people to practice Spanish with in exchange for helping them with their English, and the only reason that worked is because I was a native English speaker and English happens to be a very highly demanded second language in Spain (and almost everywhere else in the world at the moment).  I had a lot of luck, in other words.

There’s another problem: if you don’t speak the language before you go there then you won’t speak it when you get there and therefore you won’t be able to practice speaking it with the locals.  This sounds stupid but a lot of people get the idea in their head of going abroad to learn a foreign language, get there, then realize, “I don’t speak this language…I can’t practice it because I don’t speak it.  These people around me aren’t language teachers I’m paying to teach me their language, so they won’t.  Oh damn.”  You need to already speak the language at some kind of decent-ish level before you get there in order for this to work.

I have ranted enough

I have ranted enough.  You are tired of me and so am I.  My laptop’s even tired of me, the battery’s going to die in 18 minutes it tells me.  I have said enough, and I genuinely hope this helps people, despite the tone of this post.  What I really want to convey is this:

You can do it, now, from wherever you’re at, without spending much if any money.  Just start, right now.  Get a tutor or language exchange partner on iTalki, find some videos on YouTube in Spanish that interest you, sign up for an online group class (GoSpanish is great, I talk about them below), look up what you don’t know, put it in Anki, and start learning.

After six months or a year of this then you can go to Spain/Mexico/Germany/wherever and have a much, much better experience that you would have if you did it now.