My Most Important Language-Learning Tool: Anki – What it is, why it’s awesome, and a video on how to use it with the Telenovela Method! 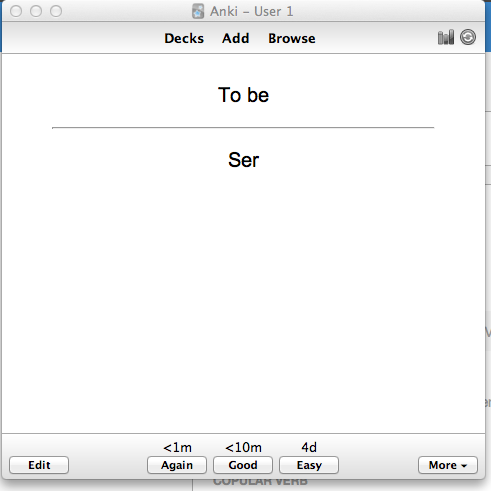 Anki is by far my most important tool that I use in learning Spanish using my own personal method, the Telenovela Method.  It has been a vital staple of my language learning for years now and I just realized I’ve never really done a full and proper post about it, why it’s so valuable, and how to use it, so here goes…

It is essentially an extremely well-designed, sophisticated, electronic flashcard program of sorts, a memorization aid, a tool to allow you to much, much more efficiently and effectively memorize anything.  It allows me to simply note, once and only once, new Spanish (new vocabulary or grammar or phrases/idioms or what-have-you) that I’ve just learned via a movie, TV show, book, etc. and to then

quickly go back to whatever I was watching/reading/listening to without having to worry about forgetting the new Spanish I just learned.  That Spanish I just learned and noted in Anki will now become part of my normal daily review that I do every morning and which typically only takes about 15 minutes or so, and that’s with currently over 1000 cards in Anki that I end up reviewing at some point or another.  It allows you to have massive amounts of information stored in a sort of electronic flashcard deck that will be automatically brought up for review for you when, and only when, they need to be.

That is to say: you can have thousands of words, grammar rules, expressions and idioms, etc. stored in Anki and Anki’s algorithm, its formula for determining when cards need to be reviewed so to speak, will be able to determine precisely when those cards need to come up for review.  It determines this based on the following criteria:

The concept behind these systems is that carefully spaced review of material is the most effective way possible to review it and an extraordinarily effective memory technique—and it is, believe me. Spaced repetition is a learning technique that incorporates increasing intervals of time between subsequent review of previously learned material in order to exploit the psychological ‘spacing effect’. The spacing effect is a phenomenon where people more easily learn items in a list when they are studied a few times over a long period of time, instead of repeatedly in a short period. Although spaced repetition can be used to learn almost anything, it’s especially good for the memorization of large numbers of small individual items that must be retained in memory indefinitely, therefore making it particularly effective for learning foreign language vocabulary, grammar, and syntax.  If you’re interested you can read more about these phenomena on Wikipedia: Spaced Repetition and The Spacing Effect.

The best SRSes tailor the spaced repetition to the individual learner based on that learner’s personal progress and performance with each individual card. That is, cards that you frequently get wrong will be reviewed more frequently than cards that you usually get right.

So, for example, initially you would be shown a card for the first time in Anki and if you don’t know it then Anki will show you that same card during that particular session again later (and if you don’t get it right then, it will be shown over and over again during that same session until you do get it right—the session doesn’t end until you’ve gotten each card right). If you did know the card then you’ve got three options for indicating how well you knew it: “hard”, “good”, or “easy”. If you say “hard” during your very first review of this card, then the card will be ‘due’ for review tomorrow, if you say “good” it will be ‘due’ in four days, and if you say “easy” it will be ‘due’ again in eight days.  Now, the number of days until it will be reviewed again if you knew the card will become greater and greater the more often you review the card as long as you continue to indicate that you knew it (by clicking ‘hard’, ‘good’, or ‘easy’): for example, I’ve got cards in my various Spanish decks now that only come due for review once every seven months or so.

The more you review the card and indicate that you know it the less often you will see it. This is how you can easily have over 1000 cards in Anki but still only spend about 15 or 20 minutes a day reviewing them (you’ll only review a tiny fraction of that 1000 every day) and you’ll never forget a single one of them, this is how you can perfectly memorize thousands of vocabulary words and expressions and grammar rules, review them just often enough to keep from forgetting them, and not spend very much time per day doing it. By the way, this is precisely what Anki’s algorithm is calculated to do: show you cards just barely often enough to keep you from forgetting them but no more often than that in order to prevent you from having to spend any more of your time reviewing them than is absolutely necessary.  Its mission is the perfect combination of effectiveness and efficiency so that you get the result that you want and spend the absolute least amount of time possible doing it.  And, in my experience, Anki is very, very good at doing this.

Where do you get it?

Like I said, it’s free, first of all, and additionally it’s available for pretty much every OS and platform out there including Windows, Mac OSX, Mac iOS (that includes iPhones, iPads, and iPod Touches), Android, Linux, and FreeBSD. Go here to their website to get it.

How do you use it?

Entering the data into Anki

I decided to make a video (my first ever!) showing you how I do this, how I integrate Anki with the Telenovela Method by entering all the new Spanish I learn from a media item I’m using (movie, TV show, book, etc.) into Anki as I watch/read/listen to the item in question.  Check it out:

Note how I always include the context in which the word was used, frequently with screen shots if I’m watching a movie or TV show. I didn’t used to do this but I started trying it a couple years ago and it makes a huge difference, definitely worth doing. Frequently you’ll see the word and remember the sentence it was used in first and then that will remind you of what the definition is! Many times I’ve been unable to initially think of the direct definition but I will be able to remember the sentence it was used in which, of course, tells me what the word means and then I’ll be able to recall the formal definition.

What you saw above was the first of two parts of using Anki, how to initially get the Spanish you want to learn into it.  Now I’m going to talk about the second aspect of using Anki, actually reviewing with it.

First of all, this should be a daily habit: reviewing my decks in Anki is one of the first things I do in the morning after I have breakfast, and it only takes about 20 minutes at the most, and that’s with 8 different decks containing a total of 1,345 cards at the time of this writing. Now, like I said, I obviously don’t review every single card every single day, I just review the ones that are due and most of those cards have been reviewed and marked as “I got this correct” many, many times and therefore they’re only coming up for review once every few weeks or months (some of them only come up once or twice a year at this point).

Secondly, I always speak the example sentence out loud, usually a couple of times. Maybe I’ll even think of an additional sentence or two on the fly that I can use the word in and say those out loud as well. Speak, listen to yourself to see if you sound as you should, and then make the necessary corrections each time you review by saying it out loud until you get it correct—if you have to say the example sentence 10 times, improving just a little bit each time before you nail it, then so be it.

The point is, in summary, just be sure to make a daily habit out of reviewing your cards, ok? That’s really all it boils down to. It doesn’t matter when or where you do it just so long as you consistently do it. Persistent consistency, right?