The Tacit Approach to Learning Languages

Hi guys, today I’ve got a guest post from Alberto Horihuela, who’s the head of business development over at Drama Fever, currently one of the few legal sites for watching full episodes of Spanish-language telenovelas in the United States (I just recently added Drama Fever to my very popular List of Best Free Sites to Watch Spanish-Language TV Online).  He contacted me because they had noticed that a growing percentage of their members were people who were using their service for the express purpose of learning the language that the TV show was in and he knew that was a method that I advocated.  They currently have several telenovelas available on their site–full episodes, for free–and they all have English subtitles available; I asked him if they had considered doing Spanish subtitles and he said that it was being considered, so let’s hope that happens.

Today he’s going to write about something very related to their service and the method that I advocate, that is learning a language tacitly versus explicitly.  Have a look.

The Tacit Approach to Learning Languages

Have you noticed how people who move to other countries tend to learn the language faster than those who studied it from their home countries? Intuitively, it isn’t hard to see how the constant exposure to a new language in day-to-day interactions would push one to learn faster. However, educational science tells us that it is more than just increased exposure, but also the method of exposure. Indeed, the improved rate of learning comes largely from the use of tacit vs. explicit knowledge creation.

Think of tacit knowledge as intuition – it is knowledge we already have or acquired through past experiences, yet we are unable to easily explain it. It’s what we have learned through observation, practice and repetition – think about knowing how to ride a bike, or more relevant, your own native language. You may not necessarily know the ins and outs of it, but you know what sounds right and how to speak it. Explicit knowledge on the other hand is what you learn from studying facts, policies, and rules, i.e. your typical classroom learning experience. Not surprisingly, language learners tend to focus most of their energy developing explicit knowledge, while those who learn a language in a foreign country develop a more extensive tacit knowledge drawn from exposure to television and day-to-day interactions.

That is the reason why most will tell you that watching foreign television is a great way to learn a language. Short of taking a long break and moving to another country, the best (and most amusing) way to throw yourself into a new culture is through the local entertainment they produce, which reflects the language, traditions and customs of a region. An immensely useful example is watching a traditional Spanish telenovela to practice listening comprehension and absorb the elaborate yet necessary colloquialisms. It’s no coincidence that this is the method recommended by many, including the great Telenovela Method we’ve formerly advocated.

If you live in the US, you may already have access to the Latin TV channels such as Univision. Or, if you’d rather watch from your computer, you can find telenovelas in YouTube or streaming platforms such as DramaFever, which subtitles full telenovelas from Latin American and Spain. 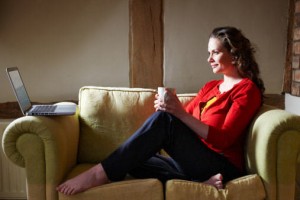 Nonetheless, we are not saying it’ll be easy: the tacit learning method requires active engagement and participation, not mere memorization. But it pays dividends! Auditory learning is more organic, babies learn languages by simply listening to the flow of dialogue and drawing logical connections. While you’re no longer a baby (we presume) your learning process will be somewhat similar. By watching telenovelas you’ll be listening to real dialogue, not perfectly annunciated Spanish, which will strengthen your listening abilities in real situations.

That being said, don’t toss your books yet – the best learning method is one which effectively combines traditional explicit learning with tacit knowledge creation – after all knowing the difference between what sounds right and what is actually right can save you a moment of mild embarrassment. Go ahead, enjoy some telenovelas and let us know cómo te va!