Today I’m going to quickly share with you my favorite resource for finding foreign language newspapers plus I’m going to show you my simple and effective method for learning the language from them (you don’t need to know any of the language to start doing this, you can be a complete beginner, it’s not a problem).

First of all, how to find them.  The following has been my go-to site whenever I want to find a newspaper to read in a foreign language I’m learning, there are several lists and such out there but this one is by far and away the best single resource if this is what you’re interested in: NewspaperMap.com.  Go there now (open it in a new tab/window, if you click on it it should do that automatically), I’ll give you some basic instructions on how to use it below along with screenshots for each step plus some additional bonus resources that will help you utilize it.

When you first go to the site you’ll see a lovely, colorful map with every newspaper in their database represented by a marker that looks vaguely like a hot air balloon (nifty!).  Each color represents a different language (for example, as you can probably guess by looking at the United States, English is yellow).  You need to narrow it down to your language that you’re learning.  Go to the menu bar at the top and select the “Filter by Language” menu – select the language you want (which will be Spanish for most of you). 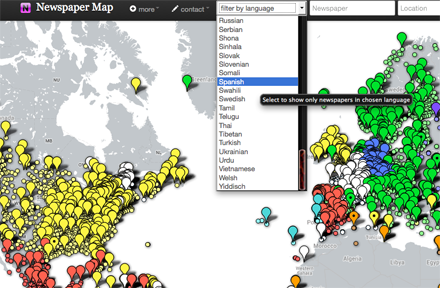 Also, quick tip: you can grab and drag the map around with your mouse cursor if need be – that is, if the country you want isn’t visible on the screen just grab the map and drag it into view.  Additionally, you can zoom in and out with the scroll wheel on your mouse if you have one.

You can do this by country if you like, if you have a particular dialect you’re interested in learning, or you can select a larger newspaper because it’s likely to have more material, better resources, and a better website, or you can just randomly pick one, whatever you want to do.  Clicking one of the markers brings a little information box up telling you about the paper you’ve selected, in this case El País in Cali, Colombia is what I’ve picked. 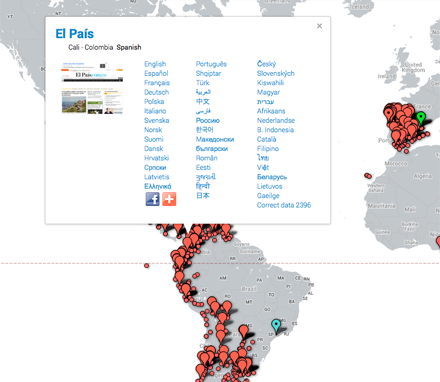 Step 3: Open the Newspaper’s Website and a Translation of It in Your Native Language

Now, I want you to pay attention to two links you need to click now: one which takes you directly to that newspaper’s website (which is, obviously, in the language you’ve selected) and then the other which will take you to the Google Translate translation of that newspaper’s website which has been translated into whatever language you want.  In the upper left hand corner there in larger font than anything else is the name of the newspaper: that’s the link directly to their homepage.  You need to open that in one tab.  Now, in another tab you want to open the translation of that same page in whatever your native language is.  Look at the long list of languages in the box (each one of those links to a translation in that language by Google Translate) and select your native language so that it opens in another tab.  English is, logically (since most of their users are native English speakers), the first option on the top left of the list.

I’ve got them open in two separate windows above for the sake of comparison but most of you will just want to use separate tabs – the original Spanish version is on the left and the Google Translate translation of it in English is on the right.   The Google Translate version won’t be perfect but it’ll be good enough for us to be able to use it, coupled with a Spanish dictionary, to figure out the meaning of everything being said, and that’s all we need, that’s plenty good enough.

Step 4: Get a Dictionary for Your Chosen Language

I recommend just opening an online one in another tab.  As I’ve stated repeatedly on this site, my number one by-far-and-away recommendation for Spanish is SpanishDict (I even made a post on why and how you can use it to do all sorts of cool things).  If you’re learning some language other than Spanish then my default recommendation is going to always be WordReference.  They’re consistently “pretty damned good” – maybe not always the best choice, but they’re reliably decent regardless of language.

Step 5: Start Reading, Look Up What You Don’t Know, and Learn It!

Simple.  You see a word in the language you’re learning that you don’t know and so you look it up in the dictionary and check the Google Translate translation to see how it’s being used, which can affect which definition for it applies.  Many words have multiple possible definitions and it just depends on the context which one is meant, which is why we have that translation open in another tab: it gives us the context.

Now you have just learned a new word and a legitimate way (context) in which it can be used because you’re seeing it used, by native speakers, in an actual real-world context (the newspaper article).

1. Use Anki – it’s a flashcard program that I’ve used and recommended for years.  Just put all the new words (with their definitions) into Anki as flashcards; I also recommend you include (just copy and paste it) the actual sentence they were used in when you learned them as the example sentence (I recommend making the front of the card the English definition and then the back of the card the Spanish word and example sentence).  See my article on how to use it (demo video included) here.

2. Use Forvo to learn the proper pronunciation of all the new words you’re learning.  I can’t tell you how useful this site is, it’s basically just a huge database of native speakers pronouncing various words and phrases in their native language for you.  Their Spanish index currently has pretty much every word and phrase currently in use in the language (over 70,000 entries and rising every day), you should be able to find anything you want there, you should never not know how a word is pronounced.  For additional information, help, and tips see the video I made about how to use Forvo.

Oh, also note that you can download any entry from Forvo as an MP3 file which you can then insert into that word’s Anki card (just drag and drop it) so that when you reveal it the word will be pronounced for you.  Very cool.