How to Practice Writing a Foreign Language (and get native speakers to review and correct it for you for free!): Lang-8 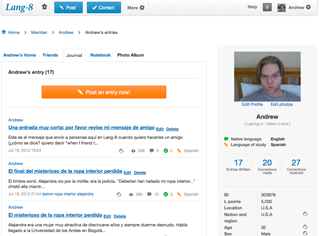 If you want to practice writing a foreign language either because you want to practice that separately in addition to speaking and listening practice you’re already doing or because you’re solely interested in learning to read and write it but not speak it, this is what you want: it’s effective (native speakers correct your writing for you!), it’s free, and it’s fun and interesting since you can write about whatever you want (I like doing goofy made-up stories, personally).  It’s called…

Lang-8 (this is a link to their site, open it in another tab and keep reading)

and here’s what it is and how to use it…

Lang-8 is essentially a written language exchange or, to put it another way, a modern electronic pen pal sort of setup.  If you know what either of those things are then you basically already get the gist.  The way it works is that you’ve got a bunch of registered users who are all native speakers of various languages (English, French, Spanish, Swahili, whatever) and who are all learning various other languages.  So you end up with a situation where there are other users who are native speakers of whatever language it is that you’re learning (unless it’s something really obscure).  Now, you write whatever it is you want to write in the form of what they call a “journal entry” (write a made-up story like I do, talk about your day, comment on a recent news story, whatever you want to do) in the language that you’re learning, publish it, and native speakers of that language will come and correct it for you because…why, you ask? 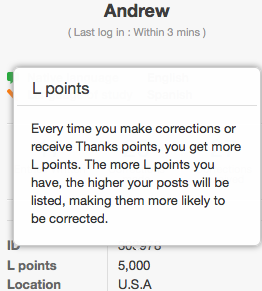 Because you’re doing the same thing (not necessarily for them, Lang-8 uses a currency system so that’s unnecessary, thankfully), that’s why: quid pro quo.  What I mean is that you get what are called “L points” for correcting other people’s journal entries (that are written in your native language, which is the language they’re learning) and the more L-points you get the more likely they will be to get corrected (and the more people they’re likely to be corrected by: it’s great to have multiple points of view, it really is).  Native speakers of language X who are learning language Y correct the writings of people learning language X in exchange for native speakers of language Y doing the same for them.  Make sense?  Your native language is English, let’s say (probably is), and let’s say you’re learning Spanish: you correct the journal entries of people trying to learn English because this gets you “L points”, you then write your own journal entry in Spanish and publish it, which is listed at the top of the homepage of all the native Spanish speakers on the site, several of whom see it and, wanting to earn some “L points”, correct it for you.  Whew.  Got it now?  It’s not complicated but it is a pain in the ass to explain.

It’s easy, just register with them (for free) with a valid e-mail address, just like any other site requiring registration.  It’s understandable why they require user accounts since the whole currency system wouldn’t work without it, plus people can see your overall stats that will tell them how good you are about returning the favor and that acts as a sort of credit rating for you. 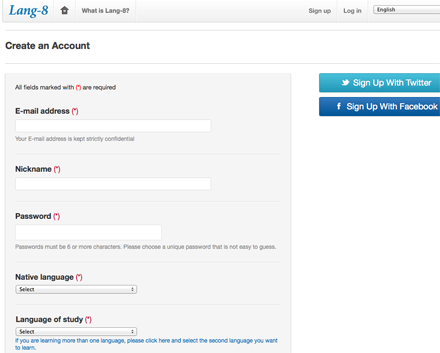 All you have to do is provide is an e-mail address, pick a nickname, choose a password, and tell them what your native language is and what language you’re learning.  Also note that you can just register using your Facebook or Twitter account if you’d prefer to do that.

You don’t need to do much and it won’t take long, really, maybe 5-10 minutes or so, but you need to establish some credit on the site before you can reasonably expect anyone else to do corrections for you.  It doesn’t matter what their native language is (no, it doesn’t need to be the one you’re learning, that’s the beauty of a currency system like this) just so long as you speak the language they’re learning that their journal entry is in.

Now, look at the top menu bar: there are two big blue buttons, one of them says “Correct” – click that.

You’ll be automatically matched – based on what you said your native language was – to people who need your help.  The entries you see will be ordered by a combination of how recent they are (you probably won’t get anything more than a few hours old) and by how good that person’s “credit” is, so to speak, which is largely based on how many “L points” they have.

You’ll get a page listing the latest journal entries that need correction and which are in your native language: 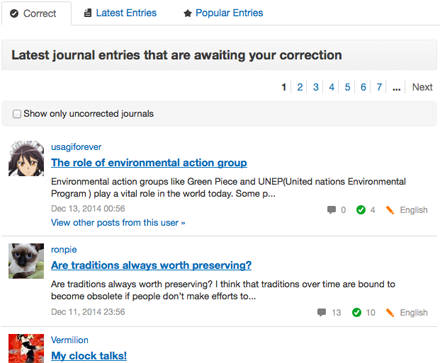 You can also change around how the entries are sorted yourself if you like: note the presence of the “Latest Entries” and “Popular Entries” tabs at the top where they’ll be sorted by how recent or popular they are.

Now select one to correct.  Once on the entry’s page you’ll have the whole entry at the top so you can just read straight through it first if you like, and then if you scroll down you’ll first see any other users’ corrections that you can refer to if you want, and then below those will be the interface where you can do your corrections.  The entry is broken down into sentences so that you can correct each sentence individually and it allows you to correct the sentence by editing it any way you want and making letters or words red, blue, bold, strike-through, or gray (there’s a guide that will tell you more specifically how to do corrections if you’re interested, plus clicking the blue button at the top that says “Go to the corrections tutorial” will give you a short on-page tutorial). 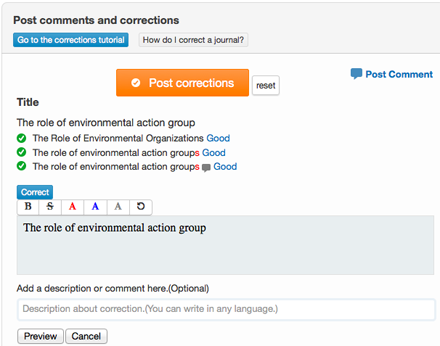 Again, just look at the top menu, find the big blue “Post” button, and click that.  Write whatever you want, I prefer to make up stories myself.

Use vocabulary that you’ve recently learned in your journal entries.  Make a point of building the entry around the words you want to use in it, let them dictate what you write.  The important thing is to actually use them.  Not only does this do a great deal to embed them into your long-term memory so you don’t forget them or what they mean, but it also gets you to genuinely learn the word (not just memorize its definition) by forcing you to use it in-context, in actual communication intended for a native speaker, a native speaker who will shortly come along and review it for you, saying “yes, this is right, that’s how you use that word”, or “no, that’s not right, that’s not how you use that word”, and if it’s not right they will then say “ok, here’s how to correctly say what you’re trying to say” – do you see how immensely valuable that is?  You really learn how to use the word.

Also note that when you’re creating a new entry you’ll have the option of providing a translation in your native language of what you wrote so that if the person correcting it happens to speak that language as well then it can really help them figure out what it was you were trying to say, e.g. if you’re a native English speaker learning Spanish and the native Spanish speaker correcting it happens to also speak English, having that English translation of it there for them can really help them out if your Spanish is particularly bad and they can’t determine, just from it, what you’re trying to say, the meaning you’re trying to convey.  I think that’s very cool and very well thought-out. 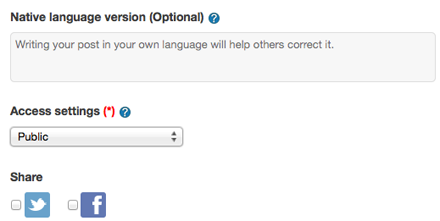 Step 4: Wait for Someone to Correct Your Entry (it won’t take long)

Like, a few minutes in my experience.  The site is very active, very popular, and so entries tend to get corrected very quickly, especially for popular languages like English, Spanish, French, German, Japanese, Mandarin, Russian, Portuguese, etc.  Even things like Czech or Swedish will get corrections within the hour, typically.  Plus, you’ll almost always have multiple corrections, that is more than one native speaker will leave a correction for you which is fantastic in my opinion since they’re almost always different!  Different people have different ways they prefer to phrase things, native speakers can be mistaken about their own language (and the more people that look at your entry, and others’ corrections of it, the more likely a mistake like that is to be called out), different dialects have different rules of syntax (and even grammar!) and different expressions (Spanish especially has huge variation amongst it’s many, many dialects), and it’s just great to have several different perspectives on the same thing.

That’s pretty much it, I hope that was interesting, let me know what you think in the comments (and would like me to write about in the future), also…  If you thought the above was at all useful and you want to learn (or are learning) Spanish, please give me a chance and read what I have to say about my book below!  Thank you so much for checking out my blog and I hope you’ve enjoyed my writing.