No, not for a language exchange.  Ask a local for a place to post a request for one.  You want a bulletin-board/classifieds type setup run by either the city or a local university.  In particular, look for where local university students (and just people around that age in general) are posting such things as requests for study partners, rooms for rent, couches for sale, jobs, volunteer positions/offers, etc.

Here’s the perfect example, it’s what I used while I was in Zaragoza, Spain for three months in 2015: Anuncios de Juventud / CIPAJ (Centro de Información Juvenil).

Oh, and who’s the chick on the left with the eagle?  That’s Azucena (the name comes from a Spanish term for the Madonna Lily).  She’s one of my language exchange partners that I found through the above site.  The reason she’s holding an eagle is because we were having lunch in a small park in Zaragoza when a “cetrero” (“falconer” or, more specifically since it’s an eagle, “austringer”) employed by the city to scare away pigeons (they poop on everything and spread disease) appeared with his eagle.  She asked to take a picture of it and he offered to let her actually hold it (I took the pictures).  Very cool. 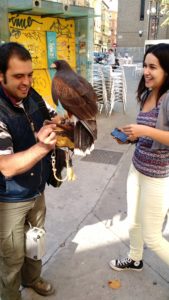 When I first arrived, I was using language exchange sites (the ones you’d normally use to set up an exchange via Skype like iTalki and The Mixxer) and not turning up a whole lot, but I knew there was a ton of demand for native English speakers to help people learn English: English is by far the most popular second language in Spain (and most of the rest of the world for that matter).  It was just an issue of: where to find them?

A bright idea occurred to me after a few days: oh, perhaps I should ask someone.

I did.  It worked.  The above site was their first (and immediate – they knew exactly what I needed) recommendation.  I posted an ad saying I was an American learning Spanish looking for language exchange partners, that it was free (you help me, I’ll help you), and I could meet most times during the day around where I lived.  Three days later I had to contact the above website and ask them to pull the ad because my inbox was swamped with enough offers to last me six months at the rate of an exchange a day.

If you go somewhere that doesn’t have English as its native language, I can guarantee you there will be a ton of people around (unless you’re in a really rural area) who will want to learn English and will therefore be happy to help you learn their native language in exchange for help with their English.  All you have to do is find them, which actually amounts to you having to figure out how to find them, which actually amounts to: you have to figure out where they’re going to be looking for language exchange partners.

This is usually a bulletin board or classified ads run by the city, a local university, or local newspaper.

Oh!  And one more thing, since “ask a local” is probably a bit irritating since it’s not very specific: search the language exchange sites like iTalki and The Mixxer for people in your specific location (e.g. Zaragoza, Spain).  Those are people who not only live there but, specifically, are interested in learning another language (probably English).  Even better if they’re around university-age (I just find they’re most likely to know about the sort of thing you’re looking for, especially since it’s frequently intended either for people their age as the above site in Zaragoza is or it’s run by a local university).

Definitely post in the comments any sites you find that others can use if they visit that same location.  I’m hoping to make a thorough list for all medium and large cities in the Spanish-speaking world as an appendix for the third edition of my book but that’s not going to be coming out for at least another year or so.  Maybe if we get enough here I’ll make a list out of it as a separate post that I’ll add to as more are found.