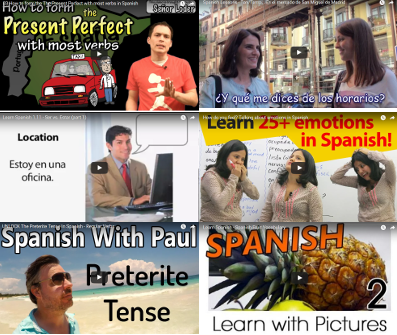 Ok, I’m going to start a list of YouTube Spanish lessons I recommend, that is to say YouTube channels that teach Spanish and, in my opinion, do a good job of it.  This list will be continually updated and maintained (as it will need to be in order to remain current and useful) in the same vein as my list of websites where you can watch Spanish videos that have Spanish subtitles (or transcripts).  That list was first published back in 2012 but has been updated many times since then to include new sites and remove old, defunct ones.  This will work the same way.

These will be channels specifically designed and intended to teach Spanish or at least to help people learn Spanish.  This includes not just

channels directly teaching Spanish (e.g. grammar lessons) but also those where the Spanish is intentionally spoken in such a way as to make it easier for non-native speakers to understand (slower than normal, avoids complex, less common words and syntax).

These channels will not be ordered in any particular way.  I’ll provide a short description and reason for why I like them along with a single video from their channel that I think does a good job of representing them.  Let’s get started.

This is a long-time favorite of mine, and what’s nice is that he’s been around forever and still consistently puts out videos.  The amount of content he offers is enormous.  He’s a Spanish teacher (no idea what level, I’m guessing middle/high school) who just makes videos over his summer break.  He’s been doing this so long (since 2007) that at this point he’s covered the overwhelming majority of commonly used Spanish.  Nearly any topic you’d like to learn about, he’s got a video on it.

He picks a single topic for each video and does an excellent job of explaining it.  His explanations are clear, slow, and include lots of examples and visuals to help you remember the material.  Check out his video below about the present perfect in Spanish to see what I mean:

Since YouTube’s not great at organizing large volumes of videos like what he has, I strongly recommend you go to this page on his website where he’s done it for you.  The videos are primarily organized by level – for the student – such as “basics”, “advanced”, and “more advanced”.  Oh, and I should point out that his Spanish is almost entirely Latin American (principally Mexican), where that makes a difference (rarely, except in pronunciation).  If you’re a beginner it doesn’t much matter which dialect you start with because the basics of a language are almost completely the same throughout the various dialects (if there were major differences then they wouldn’t be two dialects of one language but two different languages altogether).

She’s a teacher at a Spanish school (that is, a school for foreigners that teaches Spanish) in Madrid.  She’s a native speaker (unlike Señor Jordan), and obviously the Spanish she teaches is the Iberian dialect, specifically that from Madrid.  What I like about her is that she not only speaks slowly and clearly, and provides Spanish subtitles for all her videos, but especially that she makes most of her videos out of lessons with actual students.  That is, you learn a concept along with the student she’s teaching who is also learning it, that way the tempo of the instruction is matched to that of such a student, plus they tend to ask the same questions and have the same problems that you likely will have.

Check out her video about tan/tanto to see what I mean:

Yes, the dictionary.  They have their own YouTube channel where they’ve put a lot of fairly high-quality content, mostly about various grammar concepts and common phrases.  I will warn you that most of their videos are fairly old and as such the audio and video quality is not so great, but the explanations are pretty good.  The below video illustrates this (yeah, that’s 240p):

These are much more recent/modern, and very well-made.  God does she love her whiteboard, though (not criticizing).  She’s a native speaker, Latin American, though I’m not sure from which country.  She’s covered a ton of topics already, explains things slowly and comprehensively, and does so mostly in English (though I notice that subtitles are provided for when she speaks Spanish!  excellent!).  Check out this video on describing how you feel in Spanish:

He’s a native English speaker living in (I believe) Spain at the moment.  He makes fairly long videos (30-45mins) explaining various Spanish concepts, principally using very simple, Powerpoint-like graphics.  He does a good job of explaining things though and people seem to think he’s a very good teacher.  See his explanation of the preterite tense in Spanish below for an example:

Yes, the professional podcasting company.  For what it’s worth, by the way, I think their podcast lessons are excellent and it’s absolutely worth the money to get a membership.

They tend to focus more on how to say various common phrases, expressions, how to talk about certain subjects and events (New Years, your birthday, vegetables, vehicles, “kitchen vocabulary”, etc.), than grammar – if you’re looking for YouTube Spanish lessons for beginners this is an excellent choice.  This is what some people prefer so it’s a nice change from most of the rest that do largely focus on grammar.  Check out their video below on fruit to see what I mean:

I’ve just spent nearly an hour watching this guy’s videos and I’m pretty impressed overall, but I will add the significant forewarning that his style definitely will not suit some people: it’s very grammar-oriented and he presumes that you already know all the relevant grammatical terminology that he uses (e.g. “dependent clause”, “relative pronoun”, “modal verb”, “imperfect tense”, etc.).

Other than that, I must say that he does an excellent and thorough job of explaining the concepts that he does.  His videos tend to be long (20-40 minutes) but given what they’re about that’s a good thing, even a necessary one I would say.  The concepts he discusses are complex and cover a lot of ground, they need time and plenty of examples to be explained properly.  When you finish one of his videos you’ll feel like you not only have a good understanding of the topic discussed but also like it’s had a chance to sink in fairly well, not like it wasn’t just crammed down your throat as quickly as possible.

Check out his video below about the differences between aquí, acá, allí, and allá for an excellent example of what I’m talking about: it’s thirty minutes long but is probably the best video you can find online about this topic.

This is one of those series like Destinos or Extr@ that’s formulated to help people learn Spanish, so they speak slowly and clearly and at a level slightly below what adults normally would.  They do seem to offer a transcription they’ll email you, but they want a small donation for it.  Have a look at the first episode:

This is a channel run by a Colombian lady who operates a Spanish school specifically for intermediate and advanced students.  The videos are very well done with explanations in English, e.g. the following about Colombian slang:

This is a really interesting channel, his method reminds me of that of Ramses who used to do a blog called “Spanish Only”: he really emphasizes listening first, that is to say a sort of “silent period”, as it’s been called, where you just listen to the language and don’t try to speak it.  Whether you agree with this or not (I don’t), you should really give his channel a shot because he speaks very clearly and only somewhat slowly (not so much that it’s silly or annoying).  The topics of his videos range from language-learning advice and techniques to history to scenarios such as how to deal with a taxi in Spanish.

The sample video is below but if you’re interested in learning more about this method, here’s a blog post on it by a redditor who commented on the submission of this channel in the /r/LanguageLearning subreddit (highly recommended if you’re on reddit).

An excllent Spanish course based on video and audio lessons, focuses on teaching you to speak conversational Spanish…

I really recommend you check out my review of Rocket Spanish, it might be a good choice for you considering the article you just finished reading: it’s quite affordable given what you get, it’s online so you just log into their site from your web browser and start the lessons, the lessons are based on videos and audio recordings of native speakers who teach natural, everyday, conversational Spanish, not some boring, technical textbook.  I also talk about who it isn’t for, what some of its problems are, etc., so if you’re considering it and want a critical review please have a look.

I have a whole category devoted to learning Spanish from YouTube you should check out, it’s full of posts you’ll find useful: Learn Spanish on YouTube: Recommended Channels, How to Do It, Lessons Based on YouTube Videos.

I particularly recommend you have a look at the following related posts:

The 17 Best YouTube Channels to Learn Spanish.  Solid list, a few that are present here and few that aren’t.

Ok, hope that was helpful to you all.  Please, if you know of a YouTube channel that wasn’t on this list and you think it should be, tell me in the comments!  I’m happy to check it out and add it to my list of YouTube Spanish lessons if I think it ought to be here.  Also…  If you thought the above was at all useful and you want to learn (or are learning) Spanish, please give me a chance and read what I have to say about my book below!  Thank you so much for checking out my blog and I hope you’ve enjoyed my writing.