by Andrew | Jun 30, 2020 | Articles/Posts (go here to start learning Spanish!), Learn Spanish on YouTube: Lessons Based on Spanish YouTube Videos, Recommended Channels, How to Do It | 0 comments 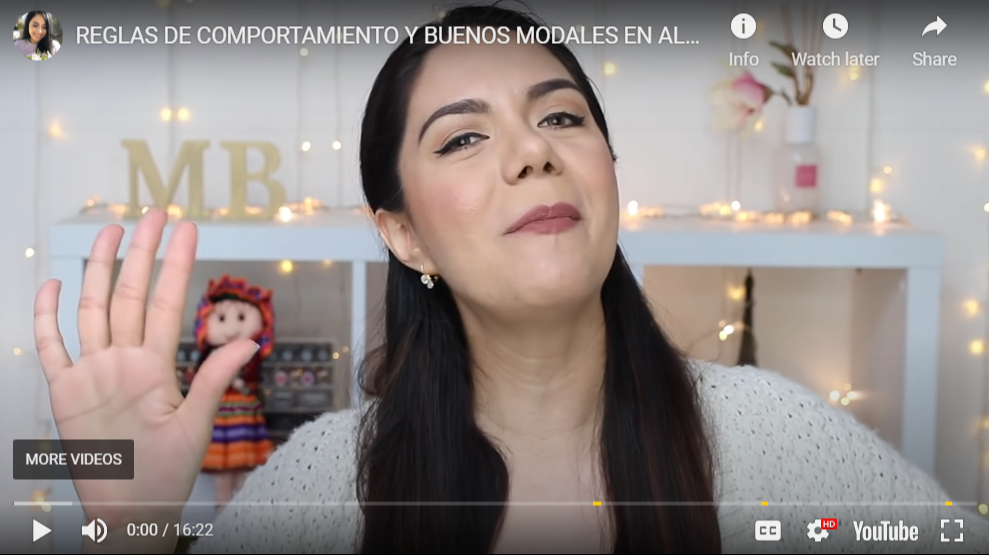 In this series of articles I call, Spanish Lessons from YouTube Videos, I take a video, typically something made by and for native speakers (not a Spanish lesson), and then use it to teach you a bit of the Spanish they use (words, phrases, expressions, grammar, syntax).  At the end of this post, for the first time ever, I’ve put a short (5 questions) quiz to help you remember what you just learned.

I can, of course, only cover a bit of the Spanish used in the space we have here (and you don’t want to spend 6 hours reading a 53-page long blog post dissecting every single thing they said), so you learn in manageable chunks that will only take you about 5-15 minutes, and I get to keep my sanity by not having to write a short novel.  However, please note that you can always click the “CC” (“closed-captions”) button in the bottom right of the video player to turn on the Spanish subtitles (if they’re not Spanish click the gear icon next to the “CC” button to change settings) and continue learning on your own.  Let’s get started.

Today’s video is from one of my favorite YouTubers, Mariebelle, a Mexican who married a German and now lives in Germany.  She makes videos about her experiences in Germany and all the various, interesting cultural characteristics of the country that she observes.  In this video she talks about some of the “rules of behavior” (“reglas de comportamiento”) in Germany.  I’m going to embed it below but if you’d simply like to have it open in another tab, here’s the link to it.

Let’s start with one of the first things she says which is a common colloquial expression in all Spanish dialects, so it’s really worth learning: “no meter la pata”.  In this context, “pata” literally means “leg of an animal” (the word pierna is used to refer to the leg of a person), and the verb, meter, means “to put or insert”, so literally it means “to not insert the leg”.  What it actually means in modern speech is, “don’t screw up”.  Here’s the context in which it’s used in the video:

What this translates to is:

…some rules of behavior that are well-regarded by the Germans that I believe could be interesting for you all, especially if you deal with German people, in order to not make any mistakes…

To help you remember it, and because I know a lot of people just enjoy learning about this type of stuff, I’ve just finished researching the etymology of this expression, and boy are you all in for some fun.  Feel free to skip to the next phrase below (“dar la mano”) if you prefer.

There are 3 possible explanations, none of which appear to have much in the way of credible, original documents to support them:

Sources for the above:

Right, well that was fun.  Moving on…

This literally means “to give the hand” and it’s how they say, “to shake hands” in Spanish.  The phrase as you hear it used here around 1:11 is:

Literally she says, “[it] is that you greet the other person giving them the hand”.  “Dando” is the Spanish gerund of “dar” – the gerund is what is colloquially known in English as “the -ing form”, e.g. running, singing, sleeping, etc.  The “le” that you see tacked onto the end of “dando” here such that it reads, dandole, is the indirect personal pronoun that can mean either “him”, “her”, or “them” (I would translate it as “them” in this case as that seems to be her intent, she’s not specifying anyone in particular).  The reason it’s indirect is because what you’re giving them, the direct object, is “la mano”, the hand, and so the person it’s being given to is the indirect object in that the action is being directly performed on the hand and indirectly performed on the person it is given to.  Make sense?  Check out this article on direct vs. indirect object pronouns in Spanish if you need more help.

This is a super Mexican expression, it’s very popular in Mexico and if you’re interested in learning Mexican Spanish in particular you’ll want to learn it.

You hear Mariebelle use it around 3:24 when she says:

The whole translation of all that being:

Already after living here several years, I’ve seen it from various people that come and refer to you informally with the other person, and I’m like, “What the hell?!”, right?  It’s super weird to me…

For clarification she’s talking about somebody speaking about you with another person and referring to you with the informal personal pronoun, “tú”.

Now, “qué onda” literally means “what [a] wave!”, where “wave” here means something more like “vibe” in English, it’s talking about the “vibes” you’re getting from a particular person or situation.  It’s also commonly used as a greeting, similar to, “what’s up?” in English, probably coming from the meaning of “what’s vibing here?” or “how’s the vibe here?”.

This is the manner in which one says, “to be accustomed to” in Spanish.  Note that this is simpler than how we say it in English – they only need two words to get the job done (“acostumbrar a”) whereas we need a minimum of three (“is/are accustomed to”).  Let’s look at the context from the video where she uses this expression.  It occurs at around 5:11:

The Germans, upon answer the telephone, or talking on the phone with another person, are accustomed to greeting [them] in a very distinct manner…

Yes, you can also say it in a manner more similar to that of English by saying instead, “estar acostumbrado a” – this literally means, “to be accustomed to”.  Many English speakers tend to do this because it’s more natural to them to phrase it like this, which is fine if you prefer as it’s also a very common way that native speakers will say it, though not in this example (from the video).

Added note: There’s a very slight distinction in meaning between acostumbrar, when used as a transitive verb as it is here, and the pronominal version of the verb, acostumbrarse, and that is that the mere acostumbrar means that one is accustomed to something, whereas the pronominal acostumbrarse means that one becomes accustomed to something (very minor distinction but it is a distinction).  This is per the RAE’s definitions of the word (look at definitions #2 and #3, ignore #1, that’s for something else entirely).  To be fair, I suspect most native Spanish speakers aren’t even aware of the slight difference in usage and simply tend to use one or the other to mean either definition and you just have to discern which they mean from the context.

…then, now the chat starts.

This is a very common expression throughout the Spanish-speaking world (common in all such countries) that means, literally, “it costs me”, but often does not refer to money.  It can refer to money, e.g. “Me costó tres cientos pesos” (“It cost me three hundred pesos”), however it’s more often used to mean that something costs somebody effort.  We would typically express this via expressions such as, “I find it difficult to”, “I find it hard to”, “I have trouble…”, or “It’s draining to have to…”.  Let’s look at how she uses it in the video:

My telephone rings and I answer it with my last name, and this is really difficult for me [she literally says that it costs her a lot of work], because in the beginning I always answered with a “Hallo” or “Guten Tag” [German for “Good day”].

So you can say that something is difficult for you and requires a lot of effort or patience by simply saying, “me cuesta”, or you can specify what it costs you as she did here by saying that it cost her a lot of work: “me costó mucho, mucho trabajo”.

Ok, I have to stop here.  This has gotten long enough for both of us.  Oh but we’re not done yet: there’s a quiz!

Yes, that’s right, I’ve decided to start putting quizzes at the bottom of posts such as these because they’re fantastic for helping people learn what was just taught because they make you recall and apply what you just learned.  These quizzes are short and free.  After the quiz I’ll repost the video so you can play it again and see how much more of it you can understand now (remember to turn on the subtitles if you need them).

Are you learning Spanish?  Would you like to use popular media like the above video, as well as movies, shows, music, etc. to do it?

I literally wrote the book about how to do that: it’s about how to learn Spanish from popular media like YouTube videos, Netflix series, movies, music, books, etc. You get to pick things that interest and/or entertain you, that are made by and for native speakers, and I’ll teach you how to learn Spanish from them.  If that interests you and especially if you’d like to support my work, I’d really appreciate if you could check it out, it’s called The Telenovela Method.  It’s currently available in both e-book and paperback from:

Hope that helps, please consider subscribing to my emails (sidebar on the top right) or at least push notifications for when I put up new blog posts.  Also, for more posts of this type check out the Learn Spanish on YouTube category.  My social media accounts are on the slidey thing on the left (I’m active on YouTube, Instagram, Tiktok, Pintrest, Facebook, and Twitter).