by Andrew | Sep 15, 2016 | Learn Spanish on YouTube: Lessons Based on Spanish YouTube Videos, Recommended Channels, How to Do It | 0 comments 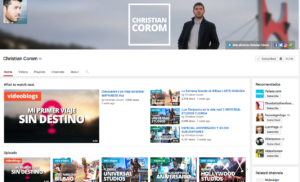 This channel is just my sort of thing, and I suspect it will be for a lot of you as well.

If so, and if you speak Spanish or want to learn to, boy have I got a channel for you.  Oh, and if you have a thing for amusement parks then you’re really going to be ecstatic about this.

Christian Corom’s YouTube channel is what you want.  His shtick his very simple: he travels to places in the world he wants to go, that interest him (important because it means he’s enthusiastic and interesting himself), and then brings a camera along and tells you all about it as he goes.  You get his first impression and therefore genuine reaction and thoughts about things.  He’s a Spaniard (from Bilbao, specifically) and speaks very clearly and, I must say, surprisingly slowly for a Spaniard (these together are a godsend for those language learners who aren’t at an already advanced level).

He’s got a thing…

But he goes elsewhere as well!

The inside of the Statue of Liberty!

The largest (passenger) airplane in the world!

You get the picture: he goes many places and talks about it.  Specifically, he makes a ~10 minute video about it that includes lots of shots of the place in question interspersed with his impressions and opinions of what he sees.  I actually rather like that the talking has intermissions breaking it up, that way a language learner who’s having to really exert some effort to follow along only has to do so for 30-45 second bursts and then they get a break.  That’s another happy coincidence for us that make his videos suited to our purpose.

You can see more on his channel and learn more about him and his journeys on his website (as well as sort his videos by destination, see the menu at the top called “Destinos Visitados”).  I hope you guys liked this and found it useful, there will be many more of these to come, let me know what you think in the comments.  Oh!  And speaking of which, if you know of any good Spanish-language videos/channels (or videos/channels that teach Spanish) that you think I should include in this series, be sure to let me know.

Also…  If you thought the above was at all useful and you want to learn (or are learning) Spanish, please give me a chance and read what I have to say about my book below!  Thank you so much for checking out my blog and I hope you’ve enjoyed my writing.