Learn Spanish for Real #7: “Pain in the neck/ass” 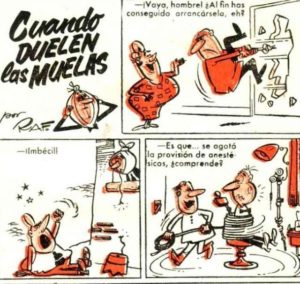 I remember talking with a language exchange partner years ago and I wanted to say that something was, as we colloquially say in English, a “pain in the neck”, so I made the mistake most inexperienced language learners make in such situations and just translated the English literally by saying “dolor en el cuello” – it didn’t work.  I got a funny look and a complete lack of comprehension from my partner.

Additionally, and I suspect this is more common in Latin America, you can also say “dolor de cabeza”, which just literally means “pain of head”, or “headache“.

And the one you’ve all been waiting for… 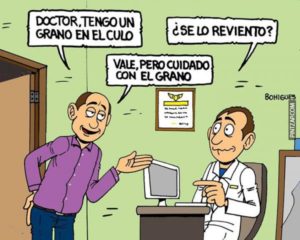 Is there something…a bit stronger in Spanish than “dolor de muelas”, but which means basically the same thing?  Do they have an equivalent to “pain in the ass”, in other words?

Yes…and I like it, it’s rather graphic and self-explanatory.

“Grano” properly means “grain”, as in a grain of sand, but it’s also slang for a pimple.  “Culo” is the direct equivalent of “ass” – it’s not the polite term for that area of the body, it’s slang and profane slang at that (I’m telling you to be a bit careful about when you use it).

Ok, that’s it.  Sorry I don’t have any cool history or stories about these for you but there’s just nothing like that I could find for these two.