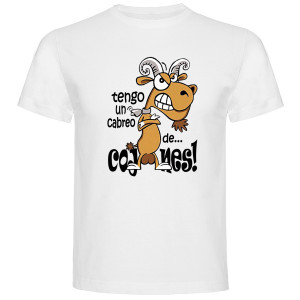 Have you ever heard the expression “throw a shit-fit”?

Well, regardless, you do now know how to say that in Spanish!

…and apparently it’s available in t-shirt format, as you can see there on the left (that’s what “cabreo de cojones” yielded on Google Images).

This expression comes from Spain, as will most in the foreseeable future since that’s the dialect I’m learning because I’m going there on September 1st for a stay of two months, and the Spanish have a strange preference for slang terms utilizing the word “cojón/cojones” (that’s a superb article on the subject, by the way), which literally means testicle/balls.

So this one comes, again, from my Spanish tutor, Silvia (highly recommended if you’re interested) while we were having one of our usual sessions the other day…

What happened was that Silvia was telling me a story of how when she was taking English and French classes back-to-back somebody else doing the same was in the English class with her, mispronounced an English word by pronouncing it would be in French, and the professor “se cogía unos cabreos de cojones”- they threw a shit-fit, that is they became very (irrationally) angry.

What does it mean and what’s the difference between it and “tener un cabreo de cojones”?

“Cogerse un cabreo de cojones” simply means to become very angry.  To break it down for you, “coger” means “to take”, making it pronomial (adding that “se” to the end) results in it meaning something like “to catch” as in “to catch a cold”, a “cabreo” is a fit or rage, and the “de cojones” part is where it gets interesting since “cojones” literally means “balls” [as in testicles].

Now, as you hopefully learned by reading the recommended article from above on the many uses of “cojón/cojones” in Spanish, that word can have many different meanings and is probably one of the most commonly used slang/curse words in all of Iberian Spanish (Spanish from Spain, Iberia is the peninsula where Spain is located).  In this case it simply amplifies the intended meaning, that is it says that the “fit” (cabreo) this person is having is really bad, they’re very angry.

Edit: Silvia has been kind enough to send me a photo of Violeta to post here for you all (she’s a mutt, rescue dog I believe): 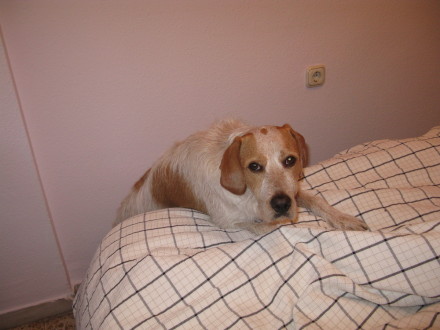 Ok, that’s it for this edition of Learn Spanish for Real, I hope you found it educational and I look forward to doing many more (I’ve no lack of material), also…  If you thought the above was at all useful and you want to learn (or are learning) Spanish, please give me a chance and read what I have to say about my book below!  Thank you so much for checking out my blog and I hope you’ve enjoyed my writing.