I have bought the tickets, booked the apartment (and paid the first month’s rent), bought the necessary luggage, and I’m about to buy some train tickets to get from the airport in Barcelona where I’m arriving to the city where I’m staying for two months, which is… 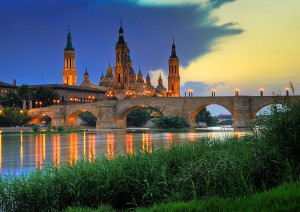 I can’t wait.  I haven’t traveled abroad in 15 years, I’ve wanted to ever since I stopped (I went on three short trips to Europe during the summer while in high school as part of a school program, that’s it).

I’m staying in the same apartment in Zaragoza for two months straight, from September 1st to November 3rd.  I’m not interested in touring around the country, staying in a bunch of different places (in hostels, inevitably) for only a few days at a time in each, and not really learning anything beyond the superficial about any of them or Spain.  I want to stay in one particular location for a long period of time, meet people, make friends, learn about the culture, the city, the country, and the language.  This is the general advice I’ve gleaned over the years from many other travelers: if you really want to learn about one particular country and its culture, you’re better off picking (carefully) one specific location and staying there for a couple of months than you are bouncing around all over the place.

My primary goal will be to learn as much as I can about how to learn a language, or improve it if you already know it, while you’re in a country where it’s spoken.  I’m doing this so that I can teach you how to do that, so that I can better serve my customers and readers who might want to know how to go about doing that.  Secondary goals will include improving my Spanish, learning about the people and culture of Spain (and conveying that information to you, of course), and gathering any little travel tips I can for you about traveling to Spain, Europe, or just traveling in general, particularly from the perspective of a language-learner.

Lastly, and solely as recreation (this is a business trip so recreation takes a back seat, yes), I’d like to spend some time learning about Spanish wine (wine is one of my hobbies), food, dance (yes, I’m planning on taking dance lessons while I’m there, probably Sevillanas), making new friends, and just generally enjoying the country and culture.

I purport to speak Spanish and know enough about the language that I’m qualified to teach it to others and to teach them how to learn it on their own.  I need to have spent some time in a Spanish-speaking country (I never have).

No, as I and others have repeatedly said, it is absolutely not necessary to go to a country where your target language is spoken in order to learn it, yes you can absolutely do it all on your own from anywhere with an internet connection or even just a decent library.  This is especially true now with the proliferation of technology like the internet and smartphones, and it becomes more and more true every single day as said technology improves.  However, I’m not just a Spanish student, now am I?  The teacher himself must always be at a much higher level than that which he teaches at.

Additionally, I’m not going there to learn Spanish from scratch, I have learned Spanish to a fairly high level entirely on my own, from home, using the Telenovela Method and online resources, most of which are free.  It works, I know it works, I think most people now know that it works.  I doubt there are very many people anymore who think you have to go to the country where a language is spoken in order to learn it.

However…I’m not just a Spanish student (and yes, I still am, you never stop learning a language, not even your native one), I’m the author of a book on how to learn Spanish and the owner of a language-learning company (and currently its only employee, haha, to be fair).  I personally believe that it’s a credibility issue, that yes, in order to really be taken as seriously as I would like to be in this field I need to spend a decent amount of time in the country where each language I claim to be knowledgeable of is spoken.  I need to have interacted with natives ‘in their natural habitat’ so to speak (hah, like they’re some sort exotic fauna and I’m David Attenborough).  I need to have experienced the people, the country, and the culture that the language originates from first hand.  So I’m going to do it…in three weeks.

Because the rent is affordable (initially I was interested in Seville – it’s expensive), the climate is nice the time of year I’m going to be there (Seville is hot right now and doesn’t even begin to cool off til October), it’s big enough to be interesting and have all the things I want to do but not so big that it’s…cold, for lack of a better word, meaning that the people are stand-offish and difficult to get to know, like would be the case in New York City, London, or Los Angeles.  Also, it’s not a tourist town, not at all, which has all sorts of various advantages: people are friendlier to foreigners, less theft and general petty crime that tourists tend to attract, lower prices, less crowded and less traffic, a higher ratio of natives-to-foreigners which is good since it’s the natives I’m interested in.

They’re going to have some interesting things going on during the time that I’ll be there, most prominently what’s commonly known simply as El Pilar, that is the Fiesta del Pilar that occurs during the week of October 12th, which is the celebration of Our Lady of the Pillar.  This is one of the biggest holidays in Spain and, unlike other major ones like Christmas and New Years, it’s one that originated there and is a distinctly Spanish holiday, and the biggest celebration of it is in Zaragoza.  This is because that’s where the appearance of the Virgin Mary that started this whole shindig happened and consequently it’s where the church dedicated to her (Basilica of Our Lady of the Pillar) is located, as is the annual festival celebrating said appearance.

Additionally, the Catalan general election will be held in September while I’ll be there (Catalonia is right next door to Aragon, the region in which Zaragoza is located) and this particular election is going to be used as essentially a referendum to determine whether or not Catalonia wants to split from Spain and become its own sovereign nation.  To put it mildly, this is kind of a big deal.  You also have the Spanish general elections that might happen while I’m there though there’s no set date for those, they simply have to occur on or before December 20th of this year.  Polls currently indicate that Catalonia probably will not vote to secede, but either way it’s gonna be a hell of a show! 😀

Lastly, as a nice bonus, it’s right next to Spain’s biggest and most famous wine region: La Rioja.  As I mentioned above, wine is one of my hobbies and one of the things I look forward to doing there when I have a bit of spare time is learning about the local wines.  This will, I really hope, include visiting to and touring some of the local bodegas (vineyards/wineries), of which there are some major ones in that particular region.

What are we going to get out of this?

Hopefully a lot more blog posts, lots of videos, and probably a book (I’m leaning towards either “A Texan in Spain” or “A Texan in Zaragoza”, my only fear with the latter being that nobody outside Spain even knows where Zaragoza is and therefore won’t know what country the book is about – what do you think?).  I already explained, roughly, what the theme of these posts would be: learning a language in a foreign country, the culture and people of Spain, etc.

The videos…I’m not even sure what exactly they will be, I’m really leaning towards just making most of those culture-related, that is it’ll just be a video shot on the street of some aspect of Spanish culture or language that I thought was interesting and decided to whip out my phone/camcorder (still not sure which I’ll use) and make an impromptu video about.  Yes, I will definitely be giving you video of me talking and interacting with natives, videos of the El Pilar festival, and anything else I think will be interesting to you.

What do you want?

What are you interested in hearing about?  What information that I could glean for you while there would be valuable to you?  Let me know in the comments or via e-mail (you can use my contact form or just e-mail me at andrew -at- traceylanguages.com).