Which Language Should I Learn? Just Ask Yourself This One Question

Which culture, which people do I want to learn about?

Yes, there are exceptions, people for whom it’s not that simple – I’ll get to that below – but that’s what they are: exceptions.

The most important factor in determining whether or not someone succeeds in learning a language is motivation.  Why?  Because learning a language is something that is relatively difficult and takes a long time, so if you don’t have a really good reason to keep going when things get rough, you won’t (I’ve talked before about this is in my post on motivation).

Choose a language you love and you’ll never work a second while learning it.

Why do people love a particular language?  Because of the gorgeous grammatical structure or sexy syntax?  No!  Because of the people and culture it represents, describes, and is associated with.

But there is vacillation.  There is self-doubt.  There is…

There is too much damn talk about which language is “easiest”.  People talk about which one has the most in common with your native language, “well Norwegian’s the easiest language for native English speakers to learn, you know…”, “if you’re a romance language speaker then any other romance language is going to be sooo easy for you so you might as well…”, “tones are really hard if you don’t already speak a tonal language”, “languages with prominent, complex case systems [German, most slavic languages] are really hard if you don’t speak one already”, and on and on and on.

Look, I’m a native English speaker, but I’ve never bothered with Norwegian and I don’t plan to.  Know why?  Not because I’m uninterested in Norway or its people (I am, would love to visit some day), but because everyone there speaks English already!  I can go there and learn tons and tons about their culture, interact and communicate with the people – nearly all of them – just with the English that I already speak.

Yes, at some point, if I stay long enough and dig deep enough I’ll hit a wall where, if I wish to go further, I’ll have to learn Norwegian, but that’s a very deep cultural hole, indeed, that I’d already have to be in.  I would’ve had to have stayed for quite a while and be planning on staying quite a while longer in order for that (learning Norwegian) to be worth it.

I realise I’m going to offend a few people who really do want to learn Norwegian, and to them I apologize: I’m not talking to you – you really should learn Norwegian (because you’re actually interested in it).  The other 99.5% of you native English speakers out there reading this – for whom Norwegian would, objectively, be the easiest language to learn – should just forget about that fact and pick whatever you’re interested in, because I can guarantee you right now that if you start up on Norwegian with no actual interest in Norway and the people who live there, you’re going to fail.  You will run out of steam (motivation) at some point and just give up.

Specific numbers: who learns a language for which reason

Yes, ok, maybe you have to learn a particular language for work or because that’s what your new in-laws speak, granted.  But that’s the distinct minority of people.  Most people interested in learning a language don’t have any real obligation to do so, let alone to learn a particular one, so it’s entirely up to their personal preference.  I say this based on my experience and research over the years.

Babbel.com did a survey in which they asked 5000 of their users why they were learning a language.  You can read the full breakdown here, but the gist of it is this: only 12% of people were doing it for work-related purposes, another 6% were doing it for their family/partner, and then everyone else was basically just doing it because they felt like it for one reason or another (“interest in the language”, “to keep mentally fit”, etc.).  There’s a pie chart (of course there is, click to expand): 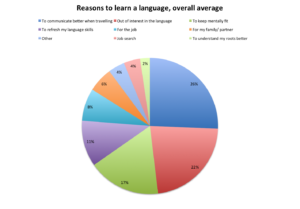 Again, credit to babel.com for this.

Aren’t some languages harder than others?

Yes.  Objectively, yes.  I mentioned above that the Scandinavian languages (particularly Norwegian) are generally considered among the easiest (objectively speaking, not taking personal factors into account) for native English speakers to learn.  I know some people have tried to convince others this is not the case, but that’s really a bit silly when you stop and think about it: of course there’s going to be a single language out there that shares more, overall (vocabulary, loan words, common root words, grammar, syntax, etc.), with your native language than any other and therefore which would require you to learn less information total than any other language in order to reach a prescribed level (e.g. C1 on the CEFR scale).

It’s just that there are a lot of variables involved so it’s complex and difficult to assess, plus the aforementioned motivation is far more important than any of those variables – I’m saying how interested you are in a language is by far the single most important variable in determining how easy it will be for you and your odds of success, not that it’s the only one.

When someone tries to learn a language and fails, it’s almost always because there wasn’t enough fuel in the tank – there wasn’t enough motivation there keeping them going in the rough times and pushing them through the inevitable plateaus – and you need a lot of fuel to make it through the language-learning journey.  A language is a huge, complex, thoroughly intertwined corpus of information, and as such it’s very difficult to master and takes a lot of time (that time can be 10 hours a day every day for 3-6 months, or it can be an hour a day for 3 years, either way you’re going to pay the piper).

Difficult doesn’t have to be unpleasant, hard work can be a lot of fun.  I’ve yet to hear anyone who just finished learning a language say “Well…that was easy”, but I have heard a lot of them say, “Oh my god that was fun, this [being able to talk to native speakers with ease] is awesome!  I need another one, I need another one!  I’m going to learn ALL the languages now!”

And that is where you want to end up at the end of your language-learning journey, not depressed and broken at the side of the road, miles from your intended destination, because you’ve gotten fed up and given up.

Pick a language you’re interested in, which is determined by who you’re interested in, and go for it.  Forget any nonsense you might have heard about how difficult it is because “cases” this, “logographic writing system” that, or whatever.  Those things can be difficult to learn, yes, but with the proper motivation they won’t be unpleasant, however every second you spend learning something you’re not really interested in definitely will be.  I hate sappy cliches but in this case “follow your heart” actually works (there are many instances where this is stupid advice, however this is not one of them), or in other words… 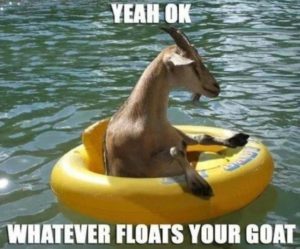