Literally, it means “this is an armed robbery”, or more colloquially, “this is a stick-up”.  An “atraco” is a robbery or hold-up, “mano” as you likely know means “hand” (but note that it’s feminine, so it’s “la mano” not “el mano”, that’s why it’s “a mano armada” and not “a mano armado”), and “armada” means “armed”.

However, this is a common colloquial expression used to mean “this is a rip-off!”, implying either that something is severely overpriced or, worse, that it’s an actual scam.  It’s very akin to the expressions “this is highway robbery” (more common in British English) or “this is daylight robbery” (I’ve heard Americans use this but I’d say it’s a bit old-fashioned, it’s not very common).

Another common way of saying this is, more simply, “¡Es un robo!”, which again I would just translate to “It’s a rip-off!”, though obviously it literally means “it’s a robbery”.

Are these expressions only used in this colloquial sense or are they also used to literally mean that something is an actual robbery / armed robbery?

They’re used to mean both, so yes they can (and frequently do) refer to an actual robbery (“robo”) or armed robbery (“atraco a mano armada”). 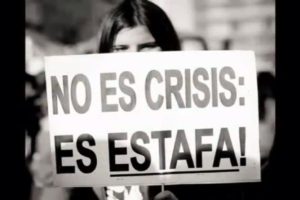 She’s very clearly saying that the recent financial crisis isn’t a crisis at all, but a fraud.

Estafa.  The word you’re looking for is “estafa“.  In this case, however, it doesn’t have any colloquial or slang meaning, it just plainly means “scam” or “fraud”.  Here are a few examples of it on Reverso Contexto.

Quick addition thanks to my friend (and Spanish tutor from Spain), Bea, who mentioned this one in the comments below after I initially published this post: the word “timo” is also a common slang term in Spain for “scam” or “swindle”, though it should be noted that it also has the literal meaning of “thymus” (a small organ in front of the heart responsible for producing T-cells for the immune system).  If you do a search on Reverso Contexto you’ll get examples of both, though the slang meaning of “scam” or “con” is more common.

Additionally, I found a great example of it being used by a Spanish newspaper, El País (click the image to go to the article): 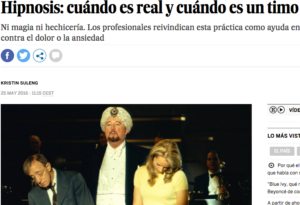 Ok, that’s all (I’m trying to keep these short, for you as well as me).  On an additional, slightly related, note, I’m going to start doing another similar, short series of blog posts on the Spanish subjunctive since I know a lot of people have trouble with that (hell, I still occasionally have trouble with that).  What I’m going to do is just provide a single example or two of it being used a certain way and then dissect the sentence, explain why the subjunctive was used here and why it was used in that particular manner, and then perhaps come up with a few additional examples as well as maybe ask you guys to do a few of your own.