What’s the Hardest Part? Speaking, Listening, Reading, or Writing? Where to Start? 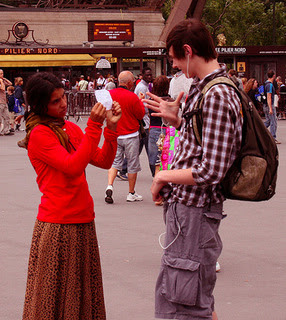 This is more relevant than you would think, in a roundabout sort of way, because the hardest aspect of learning a new language is also generally the most important one and therefore the one you need to focus on the most: speaking. It’s the most difficult and, for some people, the most unpleasant and/or scariest part of learning a new language, and so they avoid it like the plague.

Reading is the easiest because it can be done alone, at whatever pace you’re comfortable with, you can

use whatever references you want, and it doesn’t require you to create or generate anything in the language in question, it just requires you to interpret what other people are saying.

Writing is somewhat harder because you actually have to generate content in the language in question, although you can still work as slowly as you want, plus you’ve got the assistance of whatever references and tools you want to use (dictionaries, online translators, online help from native speakers, etc.).

Comprehension, listening, is quite a bit harder because you have to move at whatever pace the speaker is speaking at, although (unless it’s with someone standing right in front of you) you can still usually pause, rewind, listen again, etc. You can look things up as you go, though this is quite inconvenient when you’ve got someone speaking at a regular conversational rate of speed, and not really practical. For this reason listening to TV shows and such is usually reserved until an intermediate stage of proficiency when the learner will be able to understand at least the majority of what is said without having to look it up.

Speaking is the part that, honestly, I think at least 75% of people who start out learning a language never even get around to. Why? They’re scared. They put it off and put it off and put it off, and then it’s 6 months or a year later and they haven’t even begun speaking to people in Spanish (or whatever language they’re learning) yet and they figure that if they haven’t even started doing that yet that it’ll take forever to master the language (it will if you never speak it) and they get discouraged and drop it. The thought process usually goes something like this (I know because this has happened to me): “Geez, it’s been…what, 6 or 8 months since I started out? And I haven’t even started talking to native speakers yet, AND I don’t think I’ll be ready to anytime soon either, it’ll probably be another year or so before I’ll ‘be ready’, this is just…too much, screw it, I give up.”

You really need to start speaking much sooner, preferably immediately or very close to it. My fellow polyglot Benny over at Fluent in 3 Months advocates this approach quite strongly, and I absolutely agree. The sooner you start doing it the better. There are tons of language exchange sites (I recommend iTalki) where you can find native speakers to help  you, AND English speakers are in the greatest demand on those sorts of sites because English is the most popular second language in the world so you should have absolutely no trouble finding partners, AND Spanish is very, very prolific language with tons of native speakers on those sites so you should most especially have no trouble finding people to help you with your Spanish.

Look, I’d recommend you take maybe two weeks to a month to learn some very basic grammar and get a few hundred words into your vocabulary so you’ve actually got something to work with, but then you really need to throw yourself into the deep end of the pool and start talking to people.  The first few times you do it you can make it easier on yourself, since you’ll probably be a bit nervous and scared, by typing up a few phrases and things you want to say and subjects to talk about in a word document that you can have in front of you prior to Skyping with someone, that way you know you won’t end up freezing up and look too stupid.

But then GO!  It’s just like jumping into a cold swimming pool or the ocean: it’ll be uncomfortable and a bit of a shock to the senses right at the beginning, but very shortly you’ll acclimate yourself to it, get comfortable, and start swimming around and having fun before you know it.