Learn Spanish with Edustation.es – Very cool resource, love it (they have tons of Spanish videos with Spanish subtitles!) 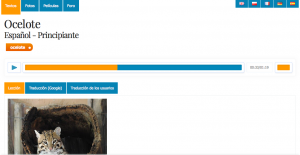 I just found a new resource that I really like and wanted to let you guys know about it (it’s free, before you ask): Edustation.es

It’s a website for people learning languages that’s entirely in Spanish (not a big deal, even if you’re a complete beginner you can always either look up whatever you need to in order to understand it or you can just plug it into Google Translate: just copy and paste the URL into the translate box on the left and hit ‘enter’).  Right now they support Spanish, English, Polish, French, and German.  Obviously we’re going to be focused what they have available for Spanish.

What they do is run a site where all the material (texts, video, recordings, pictures, etc.) is uploaded by the users who also provide subtitles in the case of videos (Spanish subtitles! yay!) as well as explanations and translations. You get points for everything you upload and those points increase your public ranking in the community where everyone can see how much everyone else has contributed, which thereby encourages people to contribute new material (and it works, new stuff is added every day). What I really like about it is the following:

1. That the texts have audio transcriptions so that you can listen to the text being read in Spanish while reading it so that you learn the proper pronunciation plus you can practice your listening comprehension

2. That the videos all have Spanish subtitles!  This is the best possible combination: videos in Spanish with Spanish subtitles.  This allows you to figure out what they’re actually saying, it’s far more useful than English subtitles (with the Spanish ones if you don’t know what something means you can just look it up, no big deal) where you can’t be sure what exactly they’re saying (in Spanish) unless you’re already at an advanced level–you can determine the meaning of what they’re saying with English subtitles, but most learners will have a hard time figuring out the actual Spanish that was used and if they can’t figure that out then they can’t really learn much in terms of Spanish from it.

3. They have a wide variety of interesting content presented in a variety of formats: texts, videos, and pictures.  The videos include music videos, TED talks, fun Spanish lessons, interviews with flamenco dancers, documentaries about Spanish-speaking countries (note that that is part 12 of a 12-part documentary about the Spanish Civil War), short fun educational cartoons for kids, short travel videos about Spanish-speaking places (like Cádiz, Spain in this case),  and much more.  Absolutely awesome video selection, and, again, all of them have Spanish subtitles! Fantastic! I’m so excited!  I’m always looking for these and they’re generally so hard to find, 98% of the Spanish videos you find online either don’t have subtitles or they’re English or instead of subtitles they provide an English translation of what was said but not a Spanish transcription.

The texts they have include an equally wide variety in terms of subject matter and difficulty, such as: a short article about the Ocelot (with audio transcription which they all have! yes! it’s right at the top, just click the blue ‘play’ arrow in the top left directly above where it says ‘Lección’) , fascinating articles that teach you about Spanish-speaking countries like Chile and Argentina and Bolivia and more, articles on economics and politics (advanced level), history and culture of Spanish-speaking countries like Machu Picchu in Peru, Spanish translations of movie quotes like this one from Fight Club, etc.

Because it provides what I think is the most useful sort of resource: spoken Spanish accompanied by some sort of transcript allowing you to determine what they said, which words they used in Spanish, no matter what level you’re at in the language.  I especially like the fact that they have a ton of videos in Spanish all of which have Spanish subtitles.  Additionally, between the videos and the articles and the pictures, the sheer quantity of what they have is quite impressive, just what’s on there now is more than enough to keep a beginning learner fully occupied for several months at a minimum, and the fact that other users are adding new material daily means that you won’t ever actually run out no matter how long you keep using the site.  Oh, and it’s free, that too, haha.

A minor bonus is that the whole site is in Spanish if you want it to be (again, if you don’t, just have Google Translate translate it for you) so you can actually use the navigation of the site itself to teach yourself Spanish.  Nifty.

Once again, the address is Edustation.es, and please remember to let me know what you think in the comments, as well as any tips or suggestions, similar sites, etc., also…  If you thought the above was at all useful and you want to learn (or are learning) Spanish, please give me a chance and read what I have to say about my book below!  Thank you so much for checking out my blog and I hope you’ve enjoyed my writing.