The Telenovela Method: After failing to learn a new language on FIVE separate occasions…I taught myself to speak Spanish like a native in just SIX MONTHS by watching movies and TV shows, listening to music, and reading books and comics like Garfield and Harry Potter…here’s how you can do it, too!

This simple, easy-to-learn secret that even the most linguistically-challenged can master literally overnight is used by many of the most respected and skilled polyglots and language teachers in the world, and it’s never really been laid out, explained, and demonstrated (on included videos!) in full, point-by-point, step-by-step detail until now.

Hi, my name’s Andrew Tracey, I own and run the blog you’re currently reading (and enjoying, I hope). I’ve had a passion for learning languages since I was 12 years old when I decided to take up French on my own (using an old ‘50s era Berlitz book and Pimsleur cassette tapes, for those of you old enough to remember what those are), which led to me taking 4 years of French in high school during which time I went on a school trip to France where I learned…

I didn’t speak French worth a damn!

3 years of French (the trip was after my Junior year) and all the work I’d done on my own time: wasted! Pointless! I later tried to learn German, Swedish, Spanish, and Japanese…on my own and by taking classes while at university. All failed. The textbooks, classes, and audio tapes didn’t work. What does this have to do with you? Well, first of all it probably sounds depressingly familiar since I’ll bet a lot of you have experienced something similar, but secondly and most importantly…

I NEVER GAVE UP: A few years ago I stumbled upon a centuries-old language-learning technique that allowed me to become fluent in Spanish in just 6 months and talk just like native speakers did (not some strangely-weird Spanish awkwardly spoken and learned from a textbook that just confuses native speakers and embarrasses you)…

And it’s something that anyone – no matter how inexperienced, language-learning-impaired, or time-crunched – and I mean anyone, can learn overnight and start applying the next day to teach themselves Spanish. If I, someone who couldn’t learn a language by almost any other means (years of classes at both high school and university, all sorts of courses and workbooks, etc.), can do it then you can do it…and I’m going to tell you how you can learn to do it right now.

Let me ask you something: when you’re watching a TV show or movie (in your native language), do you have a hard time understanding the actors? Meaning: do you have to stop and think about what they mean or look things up in a dictionary? Do they sound completely different from how you and your friends and acquaintances talk every day? Unless you’re watching a Shakespearian play: no, of course not! They talk normally, just like you and everyone else does.

They’re speaking the language normally, in precisely the way that someone wanting to learn that language would want to learn to speak it! Ah ha! Eureka!

When characters in a movie or TV show are speaking the dialogue, unless it’s set in a previous period like the 1800s or something, they speak normal everyday English (or whatever your native language is). So if you wanted to learn Spanish, the type of normal everyday Spanish that native speakers use every day, aka “conversational Spanish”…

Don’t you think that Spanish-language TV shows, movies, music, and books might be a good source to learn from…if only you knew how?

Not only that, but it would be fun, wouldn’t it? Far better than learning the language from some boring, dry textbook or workbook that, even worse, is teaching outdated, formal, “non-conversational” Spanish (look at the dialogue in one sometime: do people actually talk like that? NO!).

But why the hell should you listen to me?

Well, besides what you can glean from reading what I’ve written on my blog, how about if I told you I wrote a book specifically on how to do this and that it’s been a bestseller in multiple categories (namely “Language Instruction: Spanish” and “Linguistics”) on Amazon.com for over two years now, and that it currently has a 4.6 out of 5 stars rating with 34 reviews on it? Screenshot below (from the 1st edition, the 2nd edition is now available, that’s why the covers look different) and I’ll link to it further down so you can verify for yourself: 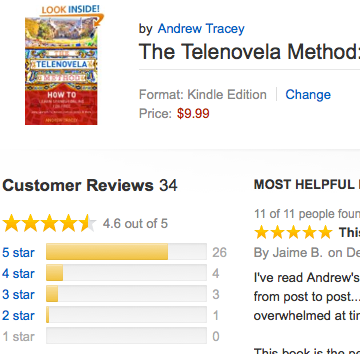 So how does this help you? In The Telenovela Method: 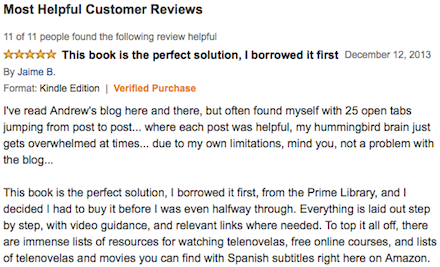 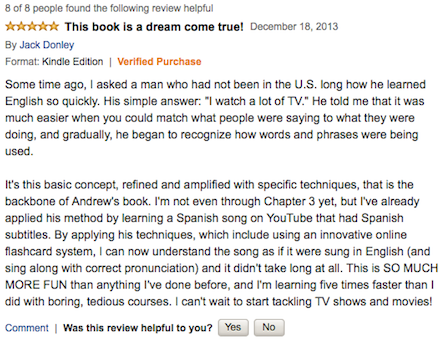 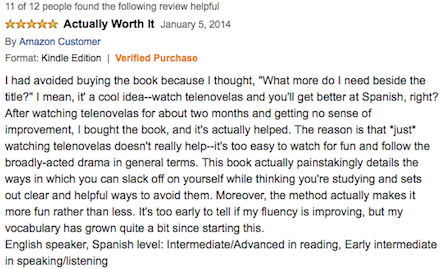 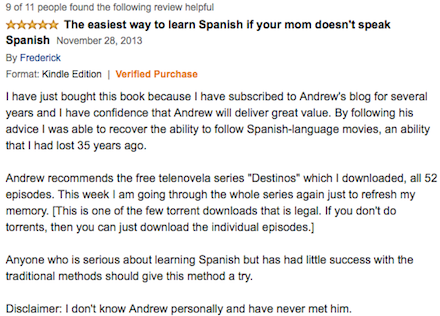 You can even try this for free by stealing it and ripping me off if you want…but please don’t!

Because this is available as not only a paperback but also an an e-book, and it’s only being sold via highly reputable vendors (Amazon.com, Barnes & Noble, Books-a-Million, etc.) who force me to accept any refund request immediately and without question by automatically taking the money out of my account and giving it to the buyer, you could very easily buy this product, download it, and then immediately get a refund for it from Amazon and, obviously, since it’s a digital product you’ve already downloaded there’s nothing to “send back” so you get to keep it (and no, it doesn’t have DRM for those of you who know what that is, I hate DRM). You could do this to me if you wanted to and I’m actually telling you about it because I’m so sure you’ll be satisfied with the product that I don’t care if you know this, I don’t think you will!

It also gives me the opportunity to point out the absolute, iron-clad, no-questions-asked, 100% money-back-instantly GUARANTEE that Amazon, B&N, and all my other retailers provide with this product by virtue of allowing me to sell it through them. They’re the ones who make the guarantee, not me, which is nice because I know that almost everyone trusts them to refund their money on any purchase for any reason – you know you can get your money back since you bought it through Amazon or Barnes & Noble or whoever, I don’t have to convince you that I will give it back to you since it’s not up to me. 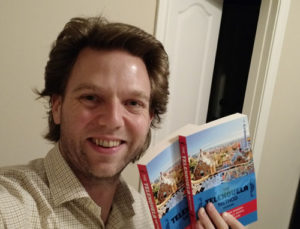 The brand-new, recently updated (published March, 2017), 2nd edition of The Telenovela Method as either a 298 page paperback or the e-book equivalent.  Check out my blog post here if you’d like to know what improvements were made for the 2nd edition (new chapter on lessons learned during 3 months in Spain and 2 new appendices, among others).  The book also includes access to over 7 hours of video instruction by me personally (they’re hosted on both YouTube and, as a backup, iPlayerHD and linked to within the book). You can download the videos from the hosting site I use if you want, also. Oh, and since the videos are hosted on both iPlayerHD and YouTube (privately hosted, you have to have the link) with each one serving as a back-up for the other, if you’re in a country that blocks YouTube or a large portion of it (e.g. Germany, China, or Iran), yes you can still view the videos.

I decided that I had to sell this book on Amazon because I wanted it to have the credibility and legitimacy that goes with that – you’re not making it onto anyone’s “Best Seller” list by selling your book just directly through your own site as a PDF or via an affiliate network like Clickbank or something like that. I wanted this thing to have a shot at making various Best Seller lists and book club lists and what not so I knew I had to sell it on Amazon, but Amazon only pays their full 70% royalty if your e-book is priced at $9.99 or less, if you go above that it drops immediately to 30%. They did this in an effort to standardize e-book prices at $9.99, and it worked. As a result of this, very, very few other Kindle e-books on Amazon are priced above $9.99 – so that’s what people are used to, that’s what they expect – therefore I knew that if I priced mine above that not only would I receive less money (unless I priced it really high) but also it would be perceived as overpriced by customers since they’d be comparing it to the other e-books on Amazon.

What to do now:

Well, if you want the e-book, just select the retailer you’d prefer, purchase (it’s on sale on B&N right now, by the way), download immediately, and start reading.  For the paperback, since it’s currently on pre-order status with most retailers, your best bet of receiving it as soon as possible is to just place a pre-order with them right now.  When they get it in stock (Amazon is saying March 23rd, others will probably be similar) they’ll send it to you.  If you’re outside the U.S. my publisher tells me you’ll be able to pre-order it within the next couple weeks, so apologies if this is you, it’ll only be just a bit longer (the e-book, of course, should be available to you right now).  You can currently get the e-book (I cover the print version below) from:

You can get the print version online from:

Also, you can almost certainly have your local bookstore order it for you, it’s been distributed to all the major wholesale networks, internationally as well as inside the U.S.  Regardless of whether you’re in Tokyo, Moscow, or a small town in Scotland, you should be able to get it via a local bookstore (they may not have it in stock but they can probably order it).

I’m not remotely close to wealthy, and this (writing about how to learn languages via my blogs and books) is what I do for a living.  I desperately want to travel continuously for the next few years, all while learning new languages and helping you all learn those languages through my blog posts, books, e-mails, videos, tweets, facebook posts, and instagram videos.  I can’t do this for free because that stuff takes time, time which if I’m not being paid for I can’t afford to spare because I’ll be too busy working “a real job” (this is a real job damnit, I work six days a week, take me seriously, grumble grumble).

All of you who read what I write, watch my videos, and especially who buy my book (including those who bought the 1st edition, of course): thank you.  I genuinely wouldn’t be able to do this without you.

It’s also vital, for one to be able to continue in their chosen occupation, knowing that other people value what you’re doing–that really means a lot (I’d have long since quit if I thought I wasn’t helping anyone).