Motivation: You Don’t Need a Shark, But You Do Need Something 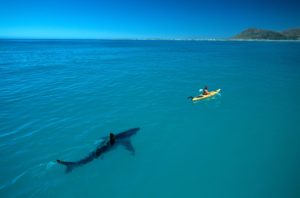 Motivation is the most important factor in determining whether or not you will learn a language, how well you will learn it, and how long it will take you. Also, if you don’t have it for the language in question, you’ll never learn it, you just won’t, almost no matter how much self-discipline you have and how much you’re willing to torture yourself, if you can’t give yourself a damned good reason to learn that language beyond “Well…I’ve always want to learn a language of some kind, and…umm…why not this one?” then you’re never going to get fluent in that language because at some point you will run out of steam and give up, it’s inevitable.

Now, that particular motivation for you could be a lot of things, if you’re required to learn a new language for your job lest you get fired, hey that’s motivation and it’s probably sufficient to get you to the minimum level of proficiency that’s required by your job…and that’s it. That’s all it’ll do, but it’ll do it.

If you’ve just gotten a new boyfriend or girlfriend, who you think is just the most fantastic, sweetest little pookie-wookie-shnookums-cutie-pie in the whole world, but who isn’t a native English speaker and especially if their English isn’t so great and you’ve realized just how much better you can communicate with them, empathize with them, write love letters to them, explain movies to them, and tell them how much you love them if you could speak their language, guess what: that’s a powerful motivator, one of the most powerful I’ve ever seen.

Guys who have repeatedly told me how much they’re not interested in learning a new language “because the whole world speaks English, so hey, why bother man?” get a cute new little French or Brazilian hottie for a girlfriend and all of a sudden they’ve bought half a dozen language learning programs, books, CDs, and such, they’re watching French or Brazilian football games with subtitles on and trying to read the newspapers from Paris/Rio, etc. etc. It’s hilarious to watch and massively educational at the same time in that it shows just what the proper motivation can do 😀

One particular tip for learning a foreign language that you will see over and over again if you look at enough blogs and read enough books on the matter is to get a girlfriend/boyfriend who’s a native speaker of the language you want to learn, and they’re right, and there’s a reason that works so damned well.

My personal motivation, and one that I know I share with a LOT of other language learners, is travel and, most especially, meeting and learning about people of different countries and cultures. I have always wanted to travel extensively and not just travel, but actually live (as in, for years at a time) in other countries–you see, I really don’t believe that you can learn very much about another culture, country, and people simply by visiting them as a tourist for a couple of weeks, and it’s even worse if you can’t speak their language.

That’s ultimately what really fascinates me, it’s my passion: learning about other cultures and people who are different from me. I could literally spend the rest of my life moving from country to country every 3-5 years and picking up, ooohhh, say a dozen or so languages along the way.

You can’t truly understand a people and their culture in a foreign country without being fluent in their language, I don’t care HOW long you live there–I’ve met expats who are living in Thailand who have been there for the past 20 years, still don’t speak Thai, and still, unsurprisingly, don’t really understand Thais and Thai culture–they live in their own little expat bubble where they’ve resided ever since they got off the plane 20 years ago, they have their little circle of English-only-speaking expat friends, their expat bars where they congregate with those same expat friends, the stores they go to where the employees speak English to them (and they avoid places where they don’t), etc. etc. It’s sad, it’s really friggin’ sad and the perfect example to prove my point. NO, just living there isn’t going to do it if you’re going to stubbornly insist upon operating entirely in English the whole time you’re there! You can live there for the rest of your life and if you don’t learn the language you’ll never really understand the country you’ve been living in, its people, or their culture.

More than anything I want to be able to understand and communicate with the people of the countries I visit and live in, that’s more important to me than anything in the world, I care about the people, not the buildings or the pretty mountains or the fantastic architecture or the historical sites or the trinket-peddling tourist traps. I care about what they think, what they feel, and…most importantly: WHY they think and feel that way.

Not only will learning the language allow you to communicate with them so that they can tell you this, but the very act of learning that language will tell you SO many things about the people who speak it. Look at Japanese and all the honorifics used in it, how many different ways there are to say ‘no’ without saying ‘no’ directly and how important it is to do that, how important it is to avoid confrontation and how you see that reflected in the language and the roundabout, indirect way it goes about doing EVERYTHING: what does that tell you about the Japanese people??? And you haven’t even talked to any of them yet, have you?

The Easiest Language in the World

The one that fascinates you the most, or who’s people/culture fascinates you. That will be the easiest one for you to learn because learning it will be a labor of love, it won’t be ‘work’ because it’ll be fun, it’ll be interesting. It won’t be an exercise in seeing how much you can torture yourself like when you were trying to force Calculus down your throat back in high school just so you could pass that stupid test and get out of there (presuming you had absolutely no interest in calculus like most us of didn’t at the time), it won’t be something you dread doing every day and are eager to “just get it over with” so you can get onto something…interesting, perhaps? See what I mean?

Are you fascinated by the history of a certain country? If you’re a WWII buff then German or Russian may very well be for you! If you’re a Japanophile who knows more about Japanese history than most Japanese do, then I think the choice is pretty obvious. If you’ve got a serious, acute, and completely untreatable latina fetish like I do, then Spanish it is! If you’re a foodie with an undying love for everything edible and French, well…what do you think? Parlez Français!!

Which language should you learn? What are you most passionate about that has a language strongly connected to it? There you go, problem solved. Now go forth and SPEAK! And it is vitally, absolutely, monumentally important to SPEAK to native speakers, but that’s a whole ‘nother post altogether.

Please, tell me in the comments, why are you doing this?  You don’t need to be able to speak a language other than your native one, not really: you can get around your home country, buy food, get a job, pay rent, raise a family, etc. without ever having learned another language besides your native one.  Also, this takes a lot of time, self-discipline, motivation, energy, work, and usually some amount of money (which could range anywhere from a grand total of 50 bucks for books to thousands of dollars spent on travel), this shit’s hard, you could be building model trains or getting really good at playing Call of Duty or whacking a little ball around a field with a stick instead: so why are you doing this?

I think you’ll find that being forced to write out a good, solid explanation will be quite therapeutic for you in that it’ll help to remind you just why you’re working so hard at this, it’ll recharge your motivational batteries, so to speak.  So come on, give it a shot, tell us what your deal is!  Also…  If you thought the above was at all useful and you want to learn (or are learning) Spanish, please give me a chance and read what I have to say about my book below!  Thank you so much for checking out my blog and I hope you’ve enjoyed my writing.