I’m going to teach you the method I use to memorize vocabulary nearly in real time as I hear or read it.  That means you memorize, briefly (we’ll come back to this), new words you encounter while you’re watching video content or reading in a foreign language.  You’ll have to briefly pause to do this, yes, there’s no way to memorize anything in the mere fraction of a second between spoken words, but this is still a very quick method that allows you to get through an online video, show, or movie you’re watching in a foreign language relatively quickly, which I’ve found to be extremely important as it maintains interest and entertainment

If you have to pause a lot it ruins the experience which makes it just unpleasant work which means you’ll quit soon.  One fundamental of my language-learning technique is that we always use material that is interesting, fun, or entertaining.  I avoid anything boring like the plague so that almost always means no text books, grammar books (ok to use as reference but you don’t just sit down and “read” one like a novel), or anything specifically designed for language students (I have exceptions to this, mainly parallel texts aka “readers” but that’s what those are: exceptions).  So we want to use movies, TV shows, YouTube videos, comics, songs, etc. that we would otherwise enjoy.

How to briefly memorize new words, quickly, until you can review them later

This isn’t the perfect solution, it’s just a tip that will help you.  Let’s be realistic here: there’s no way to memorize a new word in 0.5 seconds so that you’ll remember it forever and never need to review it.  What we can do is make it a lot easier to memorize and then eventually learn it (permanently).  The idea is that this little technique functions as the superglue that holds two boards in place while you run and get the hammer and nails.  This trick is the superglue, the hammer and nail (which permanently fixes it in your long term memory so that you’ve now learned it) is using the word repeatedly in actual communication with native speakers (oral or written – you need to do language exchanges or get a tutor, both easy to do online now).  So what’s the trick?

Right, first of all this presumes that the “input is comprehensible”.  This just means you have some way of figuring out what the words and phrases you don’t understand mean, whether it’s via looking them up or using subtitles or you’ve got a native speaker helping you.  If you can’t figure out what they mean then it’s going to be rather hard to memorize their meaning, which you don’t have, now isn’t it?  Most of you are wanting to use video of some form and so you want subtitles in the language being spoken (so if you’re watching a Spanish-language movie on Netflix, you want the Spanish subtitles turned on).  This lets you identify what it is that you’re hearing and don’t understand, and then you can just run the word or phrase through a dictionary or translator of some sort (I recommend Reverso Context because it gives you real-life context) in order to figure out what it means.

Next, you come up with a mental image that:

We want to learn that the French word for “to go” is “aller”, pronounced “ah-lay”, like this (this is a native speaker saying it):

So what sounds like “aller”?  Lays!  The brand that makes potato chips.

Right, we’ve got a word (“Lays”) that reminds of the word we want to use, “aller”, because it sounds like it.  Also, importantly, that word (“Lays”) can easily be pictured in the form of a potato chip.  So now how can we get an image of a Lays potato chip to convey the meaning of “aller”, which is “to go”.  We see a huge, human-sized Lays potato chip running…at a bullfighter, who says “Aller!”  Great, we’ve got back-up here: the chip reminds us of “aller” and so does what we imagine the bullfighter saying (in Spain they say “Olé!”, here our bullfighter says “Aller!”). 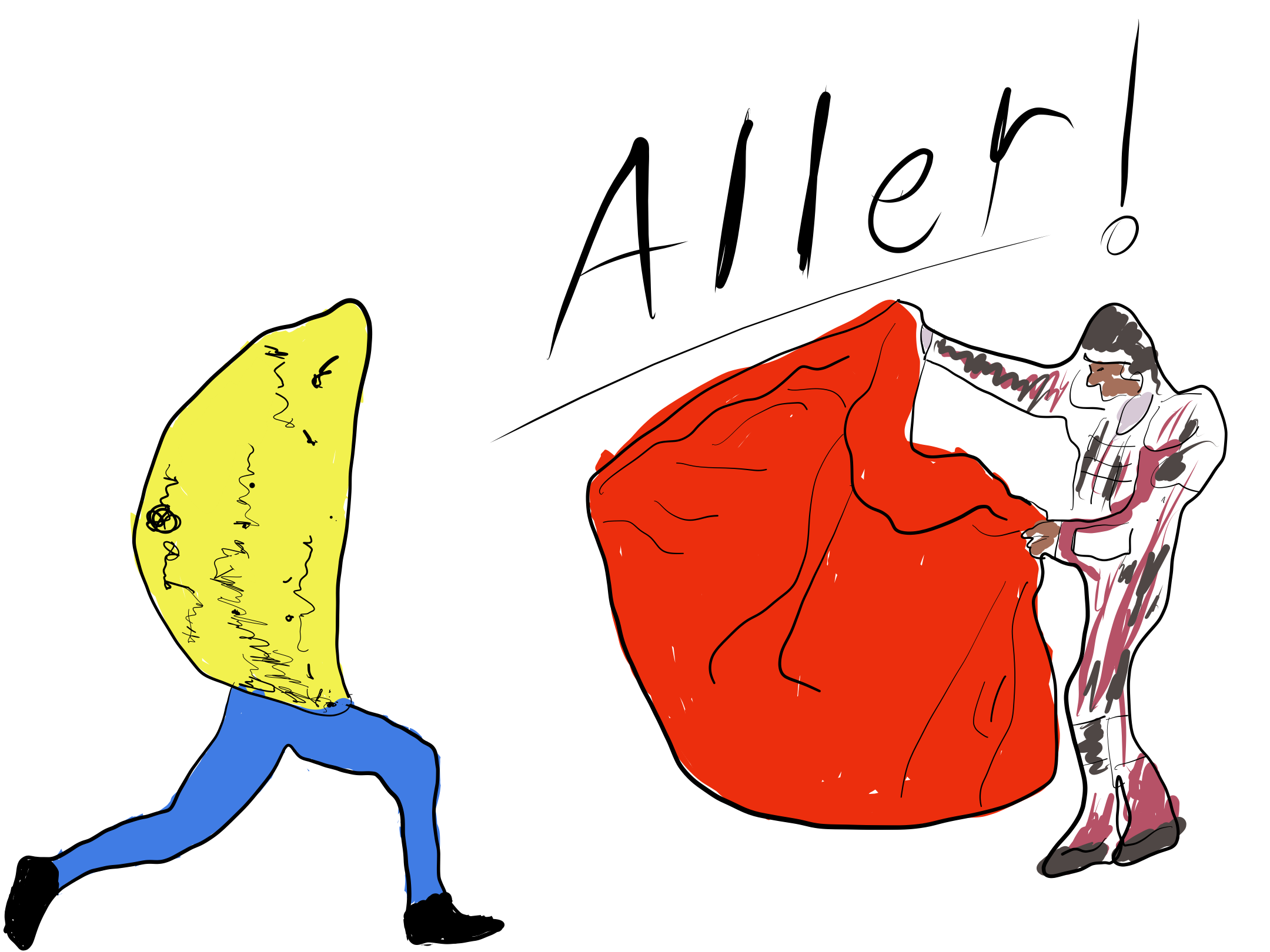 The more ridiculous, animated, and generally abnormal your image is, the more memorable it is and therefore the better it’ll work.  We don’t remember normal things, they don’t stand out, we remember weird things regardless of why they were weird.  It doesn’t matter what makes it weird, it just needs to be weird, to stand out as much as possible.

Try these yourself before you read what I came up with.  Really try to picture them in your head.

It doesn’t need to be perfect, the “reminder” words (“dunk”, “pluto”) don’t need to sound exactly like the word you’re trying to remember (“danke”, “plutôt”), they just have to be close enough to remind you of it.  Also, this is just meant to help you memorize the word in the short term until you have an opportunity to use it, either in the form of input where it’s part of a sentence in a movie or newspaper article or whatever that you’re later watching or reading, or in the form of output where you need to use it to communicate with a native speaker.  It’s just the superglue temporarily holding the boards in place until you can nail them down with the hammer and nail of later, repeated, real-life usage.

Two additional resources you should look at if you liked this

I wrote a much more comprehensive article about how to learn vocabulary that has a lot more examples and images (done by an actual artist as opposed to the Lays-bullfighter crap above that was done by me, which is why it’s crappy) and also goes into much more detail about how to do this and includes information on the “later application” part of the equation.

There’s a great service called Yabla (this is my review of them) that takes popular media like TV shows and short video clips in the language you’re learning (they offer several) and embeds the video in a special platform specifically designed to help students learning that language do so from that video.  You get subtitles in both the language spoke and your native language, you can click on any word in the subtitles to see a definition of it and have it automatically added to your flashcards they provide for you to review later what you learned, you can have quizes and games based on the language used in the video, etc.  It’s really good, check out their site here or, again, you can see my review of them here.