Learning Spanish Through TV: HBO’s “In Treatment” and its Argentine Remake “En Terapia”

I’ve got an excellent guest post for you today very much in line with my methods and previous posts, enjoy.

Watching Spanish-language TV series and movies is one of the best ways to improve your Spanish. First, you’ll be engaged and entertained, which will keep up your motivation. Second, you’ll hear people speak as they do in real life, which will give you invaluable exposure to natural speech — something you can’t extract from a textbook. And finally, you’ll gain not just linguistic knowledge, but cultural knowledge as well, as the stories and attitudes of the characters will shed light on the culture that’s being portrayed.

For learning about language and culture, there’s no better series than En Terapia (“In Therapy”), which consists of 30-minute dialogues between a therapist and his patients. In fact, En Terapia is an Argentine version of an English-language series In Treatment, which makes it a great educational tool for a variety of reasons. First, given that En Terapia is essentially a scene-by-scene remake of In Treatment, you can see directly how certain words and phrases are translated by comparing the two versions. And second, you can compare how characters handle the same situations, which illuminates interesting differences between the two cultures. 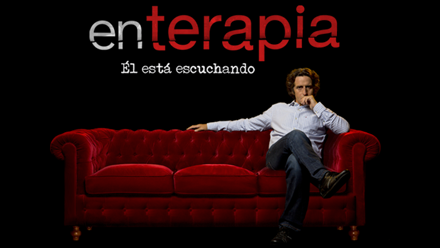 To see what I mean, let’s analyze a scene! I’ll write out the dialogues below; if you’d like, you can follow along with these videos.

Laura, one of the patients of In Treatment, is a young, intelligent woman who is having problems in her relationship, as you can see in the dialogue below:

PAUL: You were the one who made it specific: get married or to split up. That was your ultimatum.

PAUL: What about you? Weren’t you scared?

PAUL: Of splitting up.

LAURA: I wasn’t suggesting that we split up, that’s not the point.

In En Terapia, Laura’s equivalent is named Marina, and she describes basically the same dilemma:

There are a few notable points to look at in comparing these two scenes. First, you get a beautiful example of the Argentine dialect, which you might recognize from popular Argentine movies like El secreto de sue ojos or Relatos salvajes. You’ll see the use of the pronoun “vos” (which is used instead of “tú” in Rioplatense Spanish), and you’ll hear the distinct pronunciation of the letters y and ll, which sounds like “sh”.

There are also plenty of insights in vocabulary that you can take away from comparing the two clips. In the English-language version, Laura says that her boyfriend “jumped all over” the ultimatum. How would you translate a complex colloquial expression like that? Given that no exact translation of “jump all over” exists in Spanish, the writers of En Terapia decided to use a more common verb — aprovechar — to achieve the same effect.

Even in just these few lines of dialogue, we see more solutions to these tricky translations. For example, “splitting up” translates to “separarse”, and the question “Of what?” translates to “Qué cosa?”. This offers us an inside look as to how a Spanish speaker would naturally produce common utterances. 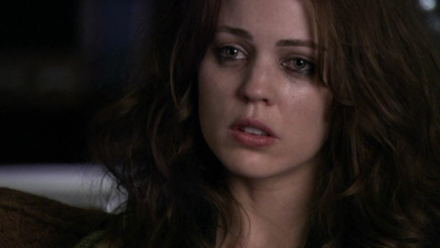 Laura, from the United States version of In Treatment

Later in that episode of In Treatment, Laura and Paul discuss an argument that Laura had with her spouse the night before. Paul suggests that Laura may have been the one who started the fight:

LAURA: I didn’t initiate anything.

PAUL: No, you may not have meant to, but you did. It sounds like you wanted to bring this relationship into crisis. I-I know you say that Andrew hates uncertainties, but perhaps you’re the one who can’t live with them. I mean, why did you choose this particular time to bring things to a head?

MARINA: Yo no empecé la pelea.

Again, comparing the two scenes gives you an insider’s look at the challenging task of translating colloquial expressions. “Bring a relationship into crisis” becomes “Llevar la relación al límite”; “bring things to a head” is reduced to “tener una definición”. Here, you can also see some expressions that don’t exist in the American version, such as “ponerle palabra”, which translates to “put it into words”. 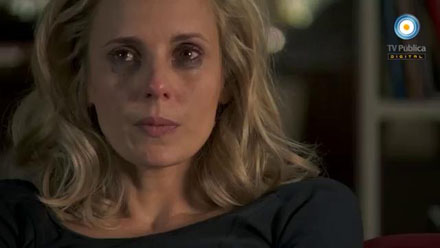 Marina, from the Argentine version of En Terapia

Finally, in En Terapia, the episode culminates in the moment when Marina admits that her relationship problems stem from the fact that she is in love with her therapist:

But the same scene in the English-language version is a bit less climactic:

LAURA: Cause he’s right. Andrew’s right. I am being unfaithful to him.

PAUL: You mean what happened last night, at the club.

LAURA: Not just last night. I’ve been unfaithful to him for a long time.

PAUL: So why haven’t we talked about this before?

LAURA: I think we have. It’s been here all along. You mean to say you’ve never noticed it?…You’re surprised.

PAUL: No, I’m not surprised, I just…I don’t follow what you mean.

In both versions, a confession of love has occurred, but only in the Argentine version does Laura say it explicitly — “Estoy enamorada de vos”. This taps into the cultural insight that you can gain from Spanish-language TV series. Whereas people from the United States tend to be more implicit and subtle with expressing their feelings, there’s none of this beating-around-the-bush in Argentina. The writers of En Terapia decided that it would be more realistic if Laura stated her feelings “claramente”, instead of simply giving hints.

Are you intrigued by the dramatic storyline? Episodes of In Treatment can be viewed or purchased on HBO; episodes of En Terapia are available on the website for Argentina’s public television channel — it’s free for those in Argentina; outside of Argentina, episodes can be found easily on Google and YouTube.

The scenes that we’ve reviewed in this article are just a few seconds of an entire 30-minute episode that’s chock-full of dialogue, idiomatic expressions, and dramatic love confessions. This makes En Terapia ideal for improving your Spanish-language comprehension. Further, watching both versions is perfect for beginners who would prefer some English-language guidance before fully immersing themselves in Spanish television. Ultimately, En Terapia is a perfect choice for the Spanish-language learner who seeks to be enlightened both linguistically and culturally.

Paul writes on behalf of Language Trainers, a language tutoring service offering personalized course packages to individuals and groups. Check out their free Spanish-language level tests and other resources on their website or send them a quick inquiry to find out more about their tailor-made lesson plans.