This is the first in a new series of posts I’m going to be doing called “Learn Spanish for Real” where I’ll teach the sort of Spanish that’s commonly used, that you need to know in order to be able to speak like and with a native, but which isn’t typically taught in traditional courses, classes, and textbooks.  That is, specifically, I’ll be focusing on slang, expressions, idioms, sayings, and curse words.  In other words, just general colloquial spoken Spanish that you would hear spoken informally amongst native speakers in their normal day-to-day lives and which you’ll also encounter frequently in Spanish-language movies, TV shows, music, and other such media intended for native Spanish speakers.

This is a clip from one of my most-recommended movies for Spanish students to learn Spanish from (would you like to know how to do that, learn Spanish from movies and TV shows and such? check out The Telenovela Method) because not only does it have excellent subtitles in both Spanish and English (the Spanish ones are word-for-word and the English ones are a solid translation of the Spanish that you can use for reference when learning it) but it’s also a very good movie that gives you a great deal of insight into certain parts of Colombian culture and teaches you a ton of their colloquial language with slang galore as well as quite a few curse words.  It’s called Maria Full of Grace and is available very cheaply from Amazon on DVD.

Now, I would like to provide you some context so you can understand the scene, the conversation, how the word is being used, and why:

In this particular scene our protagonist, Maria, has just quit her job at the flower factory because her boss had repeatedly refused her requests to go to the bathroom because she was sick to her stomach (she’s pregnant but doesn’t know it yet) which then resulted in her throwing up all over the flowers which he made her clean up despite knowing that they were ruined and would have to be thrown out (he told her this then told her to clean them off anyway).  Shortly after this we come to the scene you see above where she’s at a party with her friends, drinking and dancing, and one of her friends is telling the rest what happened and that Maria got fed up with her boss and quit.  Her boyfriend then proposes a toast (“brindis” means “toast”, from “Esto se merece un brindis” which means “This calls for a toast”) and says

Which means, “Because she’s a badass, damnit.”

“Berraco”, or “berraca” if you’re referring to a female or feminine thing as in this case, is a slang word from the Andean (around the Andes) region of South/Central America, specifically Colombia, Panama, and Peru.  Those regions tend to share accents and slang due to the fact that they share borders as well.  Many regional dialects near the borders of two countries will spill over from one into the other, that is of course if you travel from Colombia over the border into Panama the dialect and accent don’t just suddenly change from Colombian to Panamanian – it’s gradual.

Anyway, point I wanted to get at was that all 3 of those countries (and possibly others) use this word, but…they have different meanings for them: 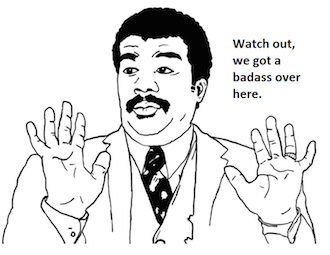 So…yeah, it can mean a lot of things and I know that’s quite confusing but it’s not surprising when you think about our own slang and the diversity of meaning it can have depending on context, region, and the dialect being used by the speaker.  Take our own term “badass”: it can be a compliment to refer to someone who’s doing impressive and brave things, it can be an adjective to refer to something merely meaning that it’s “very good”, or it can be used in a sarcastic manner as in “Watch out, we got a badass over here!” or “Well you’re quite the Billy Badass, aren’t you?”.

Now…imagine trying to explain all that crap to a non-native speaker who, upon hearing the term for the first time while watching a movie or overhearing a conversation, turns to you and says “What’s ‘badass’ mean?”.

You realize their confusion: they’ve pulled up the definitions of “bad” (something negative, not good) and “ass” (the buttocks or rump of a person or animal, or a donkey) in their minds, put them together, and…gotten extremely confused.

“Badass”?  Like…a very unattractive looking rear-end on someone?  Would it be…misshapen or something?  An ass, like a donkey, that’s misbehaving…what???  What is this?!

See what I mean?

In our next installment in this series I will cover another word used in this scene you’re probably wondering about, “carajo” – it’s a very common curse word and has some interesting history behind it, also…  If you thought the above was at all useful and you want to learn (or are learning) Spanish, please give me a chance and read what I have to say about my book below!  Thank you so much for checking out my blog and I hope you’ve enjoyed my writing.