Glossika Review: A Supplement, But a Damn Good One 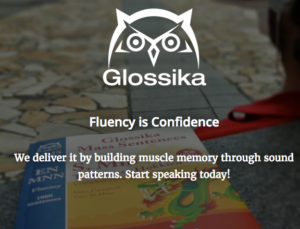 Glossika is a course that’s gotten very popular recently and as such curiosity got the better of me and I decided to give it a try.  That, plus I’m learning German (still as a beginner, I’ve had some lulls in my learning of it so I’m not as far along as I’d have liked) and I’m still at the stage where learning material like this can help.  I bought the German version about six months ago and have been using it on and off since then.  Here’s what I think…

Before I ever bought it I read reviews and the consensus I got was that it was definitely not a stand-alone course – meaning that you couldn’t get just Glossika and then learn the language entirely from that – or even really get a good grounding in the language just from Glossika alone.  Even the company founder himself has said this.  It’s not, and was never intended to be, a comprehensive course in the language.  I agree with this.  It’s a supplement to whatever else you’re using, but I’ll say it’s a fairly effective supplement if you use it consistently and do the whole course from beginning to end.  This is a big “if” – why?

I like it.  It appeals to my personality and learning style.  I don’t mind spending 30 minutes a day doing it.  I can see the progress I’m achieving from it and that’s sufficient motivation for me to keep doing it, so it works for me.  That said, it is a bit dry.  I mean, all you’re doing is sitting there listening to an audio file (and occasionally checking the book when need be) to native speakers repeating sentence after unrelated sentence.  That’s it.  You’re not listening to a story, you’re not watching a movie (or getting any sort of visual stimulation at all for that matter), you’re not listening to any music.  You’re just getting 10-12 minutes worth (it takes longer than that to get through it though, ~30mins for me the first time) of stuff like:

And on and on.  Mind you, those sentences were all sequential in the order you see above, only one (“No, I’m not”) has anything to do with the others.

That said, there’s a reason for this and a fairly sound one at that: the language you hear is carefully chosen to include only the most commonly communicated ideas in order of priority.  That is, you get the most common (and therefore most essential) stuff first, then the next most common, then the next, etc.  What you hear is ordered by how much you need to know it with the most common and useful aspects first.  Note that I said “ideas”, not words.  There are certain concepts that common in all languages, e.g. “Is ___ coming?” (“__” in their dialogue is “bus” but you learn that you can fill in anything else there you like), “Are you watching ___?”, “Are you wearing ____?”, etc.

Additionally, these concepts are repeated several times over the lessons using different dialogue so that they get embedded in your long term memory.  Here, as many of you know, Glossika is making good use of spaced repetition, a very effective teaching technique.

The following is for those of you who really want the gritty details, but frankly if this just serves to confuse you don’t worry about it: using it is much simpler and easier than understanding precisely how they’ve structured it (which you don’t need to know, you just need to follow the directions included in the booklet, which are straight-forward, clear, and concise).

Glossika is being published, for the most part, in so-called “Fluency Modules”. One module contains 1000 bilingual sentences (with 3 modules in total, for a total of 3000 sentences).  Each module is divided into three types of files: Comprehensible Input Audio (GMS-A), Interpretation Audio Training (GMS-B), and Target Language Audio Training (GMS-C).  Don’t worry, it’s actually pretty simple:

The sentences included in each of Glossika’s three modules have been carefully selected to give you a wide range of expression. The sentences in Fluency Module 1, for example, target the kinds of conversations that you would have discussing day-to-day activities.

As an added bonus, when you purchase a Glossika package you get the “Glossika Spaced Repetition” (GSR) audio files together with the “Glossika Mass Sentence” (GMS) files.  GSR files are a little bit less “ambitious”, shall I say, than the GMS files, because the sentences are repeated many, many times throughout the recordings, and so the pace overall is actually a bit slower.

If you’d like to learn more about it (or perhaps read a better explanation that mine), check out the following post on their blog: Glossika Mass Sentence Method.

There’s no grammar instruction whatsoever.  That fits this particular approach, I don’t think I’d want them to try to do any explicit grammar instruction, but some of you will definitely want grammar explanations and shall, therefore, have to look elsewhere for them…hence why I said this is a supplementary course.  Same goes for if you want to do any serious reading or writing work in the language.

A lot.  I won’t even try to list them all here, but if you want it they’ve probably got it.  Definitely all the major ones (Spanish, French, German, Italian, Russian, Mandarin, etc.) save Portuguese – I was surprised not to see it on there and can’t really offer any explanation as to why, sorry.

What do I get and how much does it cost?

You get a bunch of audio files and a book in either physical softcover form or as a PDF file, your choice.

It typically costs between $99 and $249 depending on which package you want, and overall you get a lot of material (depending on how fast you go, you’re looking at 3-6 months to get through it all I’d say) and it’s a very effective system I think it’s a fair price (not cheap, but fair), so if you’re interested I highly recommend you go to their site, read the pitch, and check out which courses they offer.

It’s pretty good but you’ll definitely need to pair it with something else, e.g. the Telenovela Method or another course like Synergy Spanish (what I recommend for straight beginners).  It’s also not cheap but most everyone who’s bought it seems to be happy so if you can afford it, I would (you can always refund it later if you don’t like it).  I’d give it a 7/10 overall, all things considered.  I’m not knocking it for being supplemental, that is for not being comprehensive, since it doesn’t claim to be and makes it pretty clear that is, in fact, a supplemental resource.

Hope that helps some people.